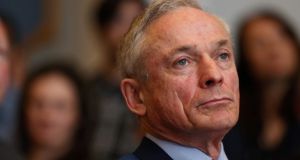 Minister for Education Richard Bruton has said he is to hold a forum on Monday as part of the final stages of a consultation process over his plans to reform school admission policy rules. Photograph: Jason Clarke

Plans to limit or remove the “baptism barrier” from admission to schools will have to respect the desire of minority religious groups to run schools which are of their own ethos, Minister for Education Richard Bruton has said.

Mr Bruton is due to hold a forum on Monday as part of the final stages of a consultation process over his plans to reform rules which allow oversubscribed schools to discriminate on the basis of religion in their admissions policies.

The plans have almost 1,000 submissions from schools, parents and organisations, a sign of the level of public interest in the issue.

The “baptism barrier” has become a highly contentious issue in recent years, given that more than 90 per cent of primary schools remain under the patronage of the Catholic Church or other religious organisations.

Mr Bruton is due to host round-table meetings with key education partners and religious groups to discuss the proposals in Croke Park on Monday.

“This is a highly complex and difficult issue, with strong feelings genuinely held on all sides of the argument,” he said, in advance of the meeting.

“There are no easy solutions to this problem, with difficulties in areas including constitutional law, administration of the schools system and protection of minority religious groups. However, doing nothing is not an option, in my view.”

This figure was even higher for those among usual parenting ages. A third of all marriages now took place outside of any religion, he added.

“My aim is to find a solution which addresses this problem, while respecting the very strongly-held and legitimate desire of minority religious groups to run schools which are genuinely of their own ethos,” he said.