Ask Brian: I want to study nursing. What are my options? 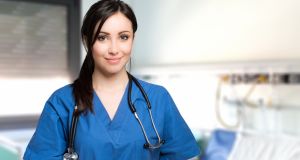 I want to study nursing but I’m told competition for places will be even tougher this year because of a cap on numbers here and an announcement that all nursing students in the UK must pay their own fees instead of them being paid by the UK National Health Service. What is likely to happen in Ireland as a result?

The Health Service Executive, as an austerity measure in 2011, reduced the number of undergraduate nursing places from 1,860 to 1,500.

The decision by the UK government in 2015 to terminate NHS funding for nursing and paramedical degrees, which covered the £9,000 (€10,410) fees, is likely to mean some Irish students many opt to stay at home.

You are right, this had led to greater competition for places, placing further pressure on CAO points.

However, Minister for Health Simon Harris has responded recently by increasing to 1,830 the number of undergraduate places which will be available in the 2017-18 academic year. The bulk of these additional places will go to psychiatric nursing, followed by general, children’s nursing and intellectual disability.

A small minority of the overall places – about 10 per cent or so - will be set aside for students in further education pre-nursing programmes.

As this is the final “Ask Brian” column of the academic year, I am going to address a number of other queries I’ve received which cut across some common themes.

There is still, it seems, much uncertainty among students who take time out after their Leaving Cert about the status of their CAO points. A worried mother, whose daughter sat her Leaving Cert last year and took a year out, asks if it is true that CAO points only last two years?

I am happy to say that a student’s CAO points can be used at any stage of their life to apply for a college place. Up to 23 years of age CAO points are the criteria used to determine whether you secure a place. Beyond that age you can apply as a mature applicant based on your life experience, and any academic qualifications you may have acquired along the way.

Another recurring source of questions are from immigrants or returning emigrants who wish to enter the teaching profession in Ireland.

A qualified primary and secondary school teacher who obtained their masters in Australia and has since returned to live in Ireland says the Teaching Council has indicated to her that she has certain shortfalls before she can be recognised as a teacher here.

“Is it possible to take certain modules only of a masters in education here, or do I have to do my masters again in this country, to ever teach full-time in a school?” she asks.

In summary, you will not have to do another masters degree, but you must take the modules for which the Teaching Council has identified that you have a deficiency. You should be able to do this in any one of the traditional Irish teacher-training colleges or through Hibernia College which provides online courses.