Boys fare better in maths, applied maths and chemistry, both at higher and ordinary level 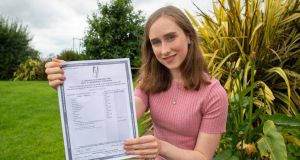 Girls have once again outperformed boys in a majority of higher level subjects in this year’s Leaving Cert.

A gender breakdown of the results shows girls secured a higher proportion of top grades – H1s, H2s and H3s, or 70-100 per cent – across most subjects.

Boys, by contrast, performed better in subjects such as maths, applied maths and chemistry. There is a similar pattern repeated across ordinary level subjects.

Figures also show there are some stark differences in participation rates. Girls, for example, were much more likely to study higher-level languages such as Irish, French and Spanish.

In most cases more than 60 per cent of candidates in these exams were girls. Biology also attracted significantly more female students.

Boys, meanwhile, accounted for the vast bulk of students who studied engineering and construction studies. Despite the overall performance gap among the genders, boys accounted for four of the five highest achievers who received eight top grades or H1s (90 to 100 per cent).

Minister for Education Joe McHugh, meanwhile, has come under fire for his comments on Tuesday that students who cannot afford the costs of going to university in a city should consider “regional options”.

Mr McHugh acknowledged that the cost of student accommodation in the cities meant some families could not afford to send their children to university.

“University is a very expensive journey for many families. Accommodation is one barrier, one thing I am very attentive to is that no more cost is put on parents and households. Yes, we have a funding issue within universities,” he said.

Fianna Fáil’s education spokesman Thomas Byrne said it was a “disgraceful attitude” and showed that the “Fine Gael view” was to “give up on becoming a doctor, physio, primary teacher, etc, if you can’t afford to live in the cities.”