‘I never pushed myself too hard in school’ 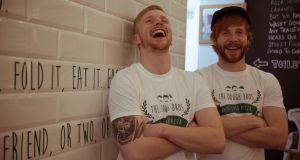 Eugene Greaney, co-owner of Dough Bros Pizza restaurant in Galway: I never pushed myself too hard in school. I knew I could do better but I wasn’t that bothered. I was a bit of a ’C2 merchant’ but my plan was to get out of Galway and go to the University of Limerick to study business. I got a big wake-up call by the time the Leaving Cert results came around.

I failed maths. So, I had to go back and repeat. I surprised myself by how I reacted to the setback and how I dusted myself down and got on with it. I took the year more seriously and it made me get my act together. I got the head down and matured that year.

I ended up exceeding the amount of points I ever thought I would get when I got 490 points. I surprised myself - and it made me realise that if I set my mind to something that I am more than capable.

It ended up being a valuable lesson in business because when we started our company we faced all kinds of dilemmas and disasters. You have to be pro-active and make sacrifices and how you respond to setbacks in life is important. Without those failures and without those mistakes, you won’t grow or learn.

After college, I went travelling in Australia for a few years. I came back to Ireland and decided it was time to get stuck into the real world. I worked in sales and marketing for an American company. Everything was going great until two years in when the rug was pulled out from under us and we were told we were being laid off as operations were being moved to Canada.

I was back to square one and instead of following my education in university, I went back to what I grew up with - hospitality, providing a service, food and making people feel good.

At 17 or 18 don’t think there’s any harm in being pushed and put under a bit of pressure - it’s your first big test. You realise however that life is a series of tests.

People who fail the Leaving Cert think it’s the end of the world.

For some people, failing or not doing as well as you expected will be the best thing that can happen to you because you can mature so much in a year.

Then, when you repeat it, you apply yourself and think more about what you actually want to do and you will probably end up making better decisions.

More often than not - it is not the end of the world and more good comes from it.

When I look back and reflect, it’s mad because 16 years ago I failed the Leaving Cert and this year our company - Dough Bros - was featured in a question on the Leaving Cert Business Studies exam paper.

I was working that day and my head was in a pizza oven. As soon as the exam ended, the texts came flooding in, so it was surreal to say the least!

In conversation with Áine McMahon