Meat plants deemed unsafe due to coronavirus will be shut – Creed 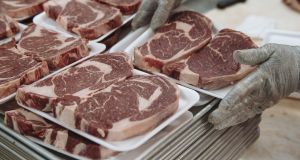 Siptu said earlier this week as many as 600 workers in meat processing plants had tested positive for Covid-19. File photograph: Angus Mordant/Bloomberg

Minister for Agriculture Michael Creed has said he will be guided by a special Covid-19 task force set up to deal with outbreaks of the virus in meat plants – including possibly shutting down factories if that is what is advised.

Mr Creed told The Irish Times that a National Outbreak Management team being led by the HSE has met twice and is due to meet again this Tuesday to examine the situation at meat plants.

According to Mr Creed, there are some 12 Covid-19 outbreaks at 56 plants licensed by the Department of Agriculture, involving 550 workers, but this figure of 550 did not include the latest figures from Kepak in Watergrasshill in Co Cork.

“The National Outbreak Team is led by the HSE but we have an involvement and whatever they will determine is necessary is what will happen, up to and including closure if that is what is deemed to be necessary,” he said.

Both Siptu and the ICMSA have called for temperature testing of all meat plant workers and Mr Creed said it was his understanding that this was already happening at many of the licensed plants.

“Blanket temperature testing, extended opening hours, reduced throughput, provision of PPE, provision of Perspex screens – these are the array of interventions that I’m aware have been deployed,” he said.

“The ultimate intervention is closure and if that is what is deemed necessary by the public health and occupational health experts on the National Outbreak Management team, then that is what should happen and will happen.”

Siptu said earlier this week as many as 600 workers in meat processing plants had tested positive for Covid-19.

“Any individual with Covid-19 or any plant where it’s a problem is a significant challenge,” said Mr Creed.

“It is important to bear in mind that should the ultimate sanction of closure be deemed necessary, then that is what will happen, and it is entirely led [by public health officials], not by industry concerns.

“I would like to acknowledge that these are deemed essential workers and they have done a fantastic job in keeping food supply chains going, but that is a secondary objective in the context of public health.

“Should it be deemed a necessary step that any one or all of these should close, then that is what will happen. It’s important to consider what Tony Holohan said on Friday, that that is not a recommendation that is being considered.”

Mr Creed said the figure of 550 meat plant workers who had contracted the virus by May 7th included many who had self-isolated, recovered and returned to work, so the figure for those currently with the virus was likely to be lower.

Speaking on RTÉ Radio’s This Week programme, Mr Creed said workers who are awaiting test results should not return to work until they are given the all-clear.

“A worker should not return to work until they have gone through full isolation,” he said. “Workers in their own interests and that of their colleagues should self-isolate if they have any symptoms.”

“Broadly speaking there is an acknowledgement that plants have responded,” he said.

“We’ve been engaged with the representative body Meat Industry Ireland in terms of taking the necessary steps and a variety of issues have been reported to us from reduced throughput to extended opening hours.”

He said social distancing was taking place “insofar as that’s possible”, following concerns that many workers must stand shoulder-to-shoulder on production lines.