Peter Weir in U-turn following outcry over downgrading of students 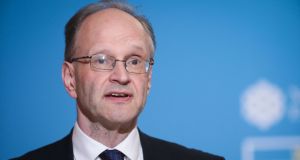 The controversy over exam results in Northern Ireland underlines the “absolute necessity” of a full time return to school for all pupils from next week, the North’s education minister has said.

“One of the lessons that I think has to be learned is there is no substitute for having examinations themselves,” Peter Weir told the Assembly on Tuesday. “It is the only thing which can be seen to be entirely robust and fair ... and underlines the absolute necessity of having a full return, a full safe return to school five days a week.”

Appearing before Stormont’s education committee later on Tuesday, he emphasised that ministers viewed the full-time return to school as a priority.

“If there are measures that as an Executive we have to row back on, there would be extreme reluctance for education to be one of them,” he said.

MLAs had been recalled from their summer recess to debate the fallout in the Assembly following last week’s issuing of A and AS level results.

A significant number of marks were downgraded by an algorithm used by the exam board to calculate students’ results.

However, the minister reversed the policy on Monday, announcing that A and AS level students will receive either the grades predicted by their school or college, or the official grade they were awarded by the exam board last week, whichever is the highest.

GCSE results - which are released on Thursday - will be based only on the predicted grades supplied by teachers.

MLAs therefore debated an amended motion, which welcomed the minister’s change of stance and recognised the implications for further education colleges and universities in Northern Ireland and called on the minister “to work urgently with Executive colleagues to provide clarity and guidance to students and educational institutions.”

Queen’s University in Belfast on Tuesday called for “clarity as a matter of urgency” on revised grades in order to confirm students’ places and on government funding to support potentially 500-1,000 additional students.

The numbers of Northern Ireland and EU students attending the North’s universities are capped because their tuition fees are partially funded by the Northern Executive.

“If substantial numbers of students are given improved grades,” Queen’s said in a statement, “urgent consideration must be given to how their university places are funded” as this is “likely to significantly exceed” the cap.

Ulster University said it would be “as flexible as possible in order to accommodate the maximum number of students possible.”

The economy minister, Diane Dodds, told the BBC the Executive “should work hard and collectively to provide those additional places,” while the finance minister, Conor Murphy, said he was “happy to work with Executive colleagues to identify the necessary resources to achive this.”

The education minister in the Assembly said he believed there would have to be a “UK wide solution” because “that level of funding cannot simply be plucked out of the air.

“All of us will need, from whatever party, to work together to be able to change that cap, to be able to provide that additional level of funding,” he said.

During the two and a half hour debate Mr Weir faced criticism from the other parties, with the SDLP, Sinn Féin and Alliance accusing him of taking the “lead from London” by failing to move on exam results until a similar change was announced in England, and the People Before Profit MLA Gerry Carroll calling on the minister to consider his position.

The SDLP MLA Daniel McCrossan, who proposed the motion, told the minister he was “glad you’ve moved but I regret that it took Boris Johnson or London to move first, and it really begs the question of this house, are we here as public representatives for the people of the North of Ireland or Northern Ireland?

“Are we here to represent them or are we to take our lead from London? Are we here to put first the best interests of our young people, of our teachers, or are we to follow London, the British government, in relation to their agenda? There are real, serious questions about what has happened here,” he said.

“This could have been avoided if the minister hadn’t followed the Tories and waited on England to lead,” said Sinn Féin MLA Karen Mullan. “The minister needs to take a stark lesson from this.”

The Alliance MLA Chris Lyttle, who is the chair of the Stormont education committee, said it was “seriously concerning that a pattern is emerging of a minister consistently following a Conservative government rather than leading for the people of Northern Ireland, a Conservative government that has adopted a slow, inadequate, and flawed response to the Covid-19 pandemic.

The Ulster Unionist MLA Robbie Butler said everybody should be “rightly grateful” for the change in stance, and while he wished had come sooner, he also wished to commend the work of the education committee on “how robustly we worked on that together and I thought that was remarkably good and perhaps gave some hope to the people of Northern Ireland that when we come together we can achieve much.”

Mr Weir defended his record and that of his department and the exam board, saying they had been facing “unprecedented challenges” and while every system adopted would have had its flaws and drawbacks, overall the grades awarded by the exam board last week had increased compared to 2019.

He said his principal concern had been to ensure Northern Ireland’s young people were not disadvantaged compared to their counterparts in the rest of the UK.

To those who “accuse me of simply following what is done at Westminster,” he said, every decision had been taken in line with advice from the Public Health Agency and the North’s Chief Medical Officer, “and if we are to decide things on health grounds we have to go to those experts.”

The motion was passed without any dissenting voices.