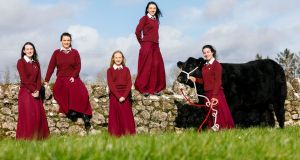 For students attending school in the heart of Limerick city to successfully raise five Angus calves in the space of 18 months is no mean feat.

The sixth-year students – Susan O’Neill, Jane McNamara, Aishling O’Neill, Aoibhinn Leahy and Emily Walsh – are from Laurel Hill Secondary School. None are from a farming background, but they had to learn farming up front, not forgetting the reality of harsh weather and a fodder crisis.

At an awards ceremony in Croke Park on Thursday they were announced overall winners of the 2019 Certified Irish Angus Beef Schools Competition.

For team member Jane McNamara, their win was “amazing” because of their city location, but they had learned to work together and to meet the challenges of the task.

In the meantime, she said, they had become the best of friends and retained much admiration for how hard farmers work; to say nothing of dealing with Brexit uncertainty and poor prices.

The competition is fought out between five shortlisted schools who help raise the Irish Angus cross calves while undertaking a project on an aspect of agriculture. The Laurel Hill girls designed a lesson programme for primary schools on farming and the importance of quality beef, complete with “From Wellies to Bellies” slogan and an animated character “Alfie the Calf”.

Young children became aware of the basics of where their food came from and how closely intertwined the farming community and agri business was in their local community, Jane explained.

Meanwhile, their calves “enjoyed many creature comforts just down the road” at Pallaskenry Agricultural College. The students visited them regularly, and monitored progress and weight gain. After 18 months, they accompanied them to the meat factory where they were processed as beef and ended up on supermarket shelves.

The competition, created by Irish Angus Producer Group (IAPG), ABP and Kepak with the support of Tesco Ireland (where the beef ends up), “challenges students to learn about beef production and understand the care and attention required to produce quality beef for consumers”. The calves are usually reared on the family farm of one of the entrants or on a neighbour’s holding.

Runners-up were Cathal Moran and John Duignan from Glenamaddy Community School in Co Galway who explored mental health and wellbeing among farmers and rural communities.

Emily O’Callaghan from Davis College in Mallow won the individual award, having “demonstrated a passion for farming and an outstanding personal commitment to the project and the rearing of the animals”.

Each of the finalists receives the financial benefit from selling the animals to the processors on completion of the project, which amounted to an average €6,500. Winning students also receive an additional grant of €2,000 for their further education.

Meanwhile 30 schools were also in Croke Park to pitch their projects in the hope of taking delivery of their calves next September.