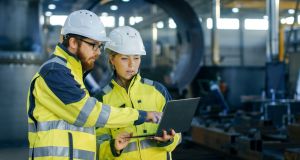 Engineers Ireland says the number of students moving into third-level engineering and technology sectors needs to be much larger to meet current and future needs. Photograph: iStock

An acute shortage of engineering graduates means there will not be enough qualified workers to meet the country’s current and future needs, the representative body for the profession has warned.

There has been a 55 per cent decrease in civil and building engineering graduates over the last five years, despite a jump in starting salaries and thousands of job openings in the sector.

While there has been a 48 per cent increase in entrants to civil and building engineering courses in higher education over the same period, this is from a low base when numbers dropped dramatically during the economic crisis.

Engineers Ireland said there is ongoing buoyancy in the sector with the financial position improving for most companies in the past year.

Company surveys indicate that almost 90 per cent of engineering firms expecting their financial position to improve this year despite Brexit uncertainties.

It says this positive business performance is translating into significant demand for engineers , with over 6,000 job openings expected this year.

The report has found that almost all engineering employers surveyed consider a shortage of experienced engineers to be a barrier to growth, while almost half expect this situation to get worse this year.

Civil and building engineers are most in demand with almost 60 per cent of organisations surveyed looking to hire engineers in this discipline.

The report, Engineering 2019: A barometer of the profession in Ireland, was launched by Minister for Education Joe McHugh on Wednesday as part of Engineers Week 2019, which runs until March 8th.

Engineers Ireland director general, Caroline Spillane, said the number of students moving into third-level engineering and technology sectors needs to be much larger to meet current and future needs.

“With just 35 per cent of the parents of secondary school children that we surveyed confident in explaining what an engineer does, as a society we need to collectively do more to inform the public about the importance and diversity of the modern engineer,” she said.

“ Junior Certificate results have shown that Irish students have a strong appetite for Stem (science, technology, engineering and maths).

“Now, more than ever, we need to retain this interest, particularly amongst females, and convert it into more third-level graduates - and ultimately more engineers entering into industry to fill the huge number of job vacancies that exist in Ireland.”

Mr McHugh said the report strongly articulated the “critical need” for engineering skills to drive innovation in Ireland and deliver vital services and projects in our communities.

“It is also highlighting the huge opportunities that are out there now for engineers and for graduates coming through the system,” he said,

He added that the Government was committed to working with industry and the education system to ensure we have the skills needed to sustain our economic growth.