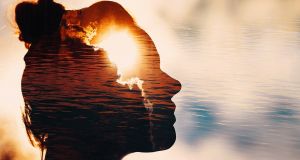 “It took a long time for me to get to the stage where I understood everything I had to do to create a balance and effortlessly float.” Photograph: iStock

It’s four years ago this month since my mental health took a bad jump off the diving board and belly-flopped into my life.

Stinging, it stayed, splashing about, making waves that almost drowned me for a good two years. Give or take a day or two.

I had a three year old. A long commute to work. And I was pregnant. The pregnancy was complicated and as those waves slowly started to wash over my head, I could feel myself sinking. An armband or two, aka a counsellor, my husband, our daughters and family kept me afloat but there was only so much they could do. I had to learn to swim again but first I had to face my fear of drowning.

I needed to be rescued on occasion but that’s okay

Postnatal depression, anxiety and everything that comes along with a troubling depiction of yourself, is crippling. Much of my problem was down to the fact that, in the initial stages, I believed I was a great swimmer and nothing could knock my confidence. But some waters are riskier than others and even the best swimmers can get into difficulty.

I had barely given my mental health a second thought.

I was who I was and why would that change?

But life throws a few storms and I was never a sea swimmer. Slowly, I began to not recognise myself. Everything simple became extraordinary and I couldn’t keep up. I became frustrated, overwhelmed, irritable, angry and exhausted beyond belief as the waves became bigger and my small arms couldn’t keep me afloat. I was drowning and it was the scariest time of my life.

It took a lot of lessons, a lot of practice and I needed to be rescued on occasion but that’s okay. It’s more than okay because all of us need a helping hand at times, the best and worst of times. Most importantly, I didn’t drown. No matter how much my head dipped under water, it would bob up on the surface time and time again.

There were three things, outside of the support I received from those around me, that helped me back to where I am now. Not necessarily anxiety free but aware and conscious of how to manage and support my ever-growing and changing mental health.

Firstly, and this was not the first thing that came to mind when trying to get myself back in lane, I learned to understand the emotions that scarily rose within me.

Our minds are complex machines. We run on a pattern of electrical charges which I won’t claim to know anything about; but what I do know is that the pattern is complicated and our associated feelings can be obscure and multifarious. I felt an anger like I never experienced before, a frustration and desperation. They terrified me but I learned, slowly, that they were there for a reason – as an odd protection as I battled thoughts and difficult situations.

I felt neglectful when I was far from it, so I switched my attitude

I had spent so much of my time thrashing about in these dark waters. Blindly and frantically attempting to swim. No rhythm, no thought, no skill. Not a pointless effort but not getting me anywhere. I suffered tremendous anxiety attacks. Daily, sometimes hourly. And I incoherently forced my way through them until I learned to pause, to breathe and refocus those incredible patterns in my mind. Slowly those attacks became less frightening, they didn’t last as long and I was swimming again, badly but swimming.

And finally, I took a step back from the guilt I had as a mother and put it all into perspective.

The guilt of my three year old taking the brunt of my emotions, seeing me cry endless tears and watching me battle an attack. I felt neglectful when I was far from it, so I switched my attitude. But I will admit this took a long, long time. I had to recognise that I needed to look after myself before I could truly look after anyone else.

It was the old “you can’t pour from an empty cup” mantra and at times my cup was bone dry. This was towards my brighter days, when the waters had calmed somewhat but there was also a risk of rough seas.

It took a long time for me to get to the stage where I understood everything I had to do to create a balance and effortlessly float. The difficult thing about swimming, is that no one else can do it for you. You have to move your own arms and legs. And have confidence in your ability.