Face masks unlikely to be made mandatory for primary school pupils 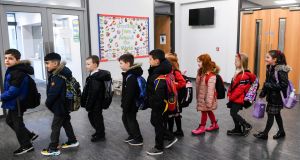 Face masks are unlikely to be made mandatory for hundreds of thousands of primary students, but children under 13 years old should not be discouraged if they wish to wear them, public health authorities are expected to decide.

A National Public Health Emergency Team (Nphet) advisory group are “highly unlikely” on Thursday to change existing policy which requires masks for second-level pupils, but not those in primary schools.

The Irish National Teachers’ Organisation has called for compulsory masks in senior primary classes – from third to sixth class – to reduce infection, though the State argues that schools remain low-risk environments.

Speaking during a webinar organised by the Independent Scientific Advocacy Group, Dr Gabriel Scally said there was no reason why children over six should not wear masks and the evidence was that they adapt well to doing so.

“I am at a loss to know why this is not being considered. In my view, we should be providing proper masks for children in school. It has to go alongside a whole range of other measures,” he said.

One of his “disappointments”, he said, had been the State’s reluctance to hire “community halls or sports settings or commercial buildings to provide more spaces, so that children can be in bigger and better ventilated areas”, he said.

“Ventilation is absolutely crucial,” he told the webinar, adding that data exists for the CO2 levels in each New York classroom, and repairs and changes are made where those levels are unacceptably high.

Supporting masks, Dr Deepti Gurdasani, a senior lecturer in clinical epidemiology at Queen Mary University in London, said France was not only introducing them, but was debating the quality of masks that should be required.

Meanwhile, schools can decide whether or not to hold mock Leaving Certificate exams even though the Department of Education says they are “neither recommended nor advised”, the Minister for Education, Norma Foley has said.

Rejecting a Sinn Féin call to warn against “mocks” during a Dáil debate and question and answer session on the reopening of schools and the Leaving Cert exams, the Minister said: “Autonomy has always rested with schools.”

Some schools have made the exams optional for pupils, but those not doing them are being told to stay home, “and it’s being suggested that [they] will influence the calculated grade”, said Sinn Féin’s Donnchadh Ó Laoghaire.

Meanwhile, the Minister said music would proceed as a practical subject and public health advice was expected shortly on the safety issues that were raised by the need sometimes for students to be in groups, or an ensemble.