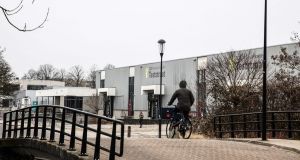 A man cycles by the Covid-19 testing centre in Bovenkarspel, northern Netherlands, targeted by the explosion. Photograph: Aris Oikonomou/AFP via Getty

Dutch police are investigating an apparent escalation in opposition to lockdown restrictions after what appears to have been a rudimentary pipe bomb exploded at a coronavirus test centre – in an attack the country’s caretaker minister for health described as “insane”.

The explosion comes a fortnight before this month’s three-day general election, starting on March 15th, in which prime minister Mark Rutte’s sometimes-controversial stewardship of the pandemic campaign will be the big-ticket issue for the electorate.

Although there was no immediate claim of responsibility for the device that went off outside the test centre in Bovenkarspel, about 55km north of Amsterdam, just before 7am on Wednesday, police said there was no doubt the attack “was intentional”.

A spokesman said forensics experts had found the remains of the device against the front wall of the building, including a piece of metal pipe about 10cm long. “Something like this doesn’t happen by accident, there’s no question about that,” he said.

There was one security guard in the building at the time of the blast, which shattered several windows along the street, but he wasn’t hurt and alerted the police.

This is the second such attack since the government imposed a rolling overnight curfew on January 23rd aimed at preventing a third wave of the virus driven by more infectious new strains – a move that sparked three nights of countrywide rioting.

The first night saw a test centre in the staunchly Protestant town of Urk burned to the ground just hours after it featured on TV news. Staff from the national broadcaster, NOS, were attacked and chased.

Centres have also been vandalised in Amsterdam, in Urmond, and in Hilversum.

The event in Bovenkarspel sparked a furious response from Hugo de Jonge, the caretaker minister for health, who tweeted: “For more than a year now we have relied on the people on the front line. And now this. Insane.”

He had been in touch with the test centre to express his support. “Of course, everyone is terribly shocked by what’s happened. We must stand firm behind the people who are working so hard to get us out of this crisis.”

According to public statistics, the area around Bovenkarspel, a rural town, has one of the highest levels of Covid-19, with 181 cases per 100,000 inhabitants compared with about 27 per 100,000 nationally. At least one local hospital has had to transfer patients due to a lack of intensive care beds.

As the election draws nearer, the government says it’s confident the entire population will have been offered a first vaccine dose by July 1st “if deliveries hold up”. Polling shows one in five voters still undecided about party preference.