Troops to be vaccinated before overseas deployment after Taoiseach’s intervention 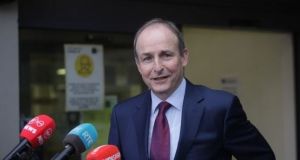 Taoiseach Micheál Martin intervened to ensure hundreds of Defence Forces personnel receive the Covid-19 vaccine before their deployment to service on United Nations missions to Syria and Lebanon, and to the EU training mission in Mali in Africa, the Dáil has heard.

Former Army Ranger Wing Commander and Independent TD Cathal Berry said “a number of them have asked me to pass on their gratitude” for Mr Martin’s personal intervention, “which ensures that they will be vaccinated prior to deploying on a six-month tour of duty” in the next few weeks.

The Taoiseach said the Defence Forces had played an “essential and extraordinary role” in the pandemic, “especially in testing and tracing, and stepping up to assist with the quarantine system and vaccinations. Their logistical support has been consistent throughout the pandemic.”

But Sinn Féin leader Mary Lou McDonald criticised the Taoiseach’s failure to move family carers up the priority list for vaccination and said they were being ignored. She appealed to Mr Martin “to hear the voices of family carers and give them their place” in the vaccination programme and “do the right thing”.

Mr Martin accused Ms McDonald of “playing politics” in claiming that family carers, a “very deserving group”, are being ignored. He said the prioritisation of groups was based on the public health advice that the “most vulnerable to the disease” and those most at risk of becoming seriously ill should be vaccinated.

Earlier, Social Democrats co-leader Róisín Shortall expressed concern that the only data available on vaccine delivery is in The Path Ahead plan for dealing with Covid-19.

She said there was a “very substantial gap” between the doses delivered and administered. In a statement she said figures show that 624,595 doses have been delivered but just 439,782 people had received the injection.

The Taoiseach said, however, that Ireland is “above the EU average with 8.3 doses administered per 100 of the population”.

Ms Shortall said in the Dáil that it seemed that more than two-thirds of the Astra Zeneca supply had not been administered.

“Four-fifths of the promised supply of the Moderna vaccine have not yet been administered. The number is smaller in the case of the Pfizer/BioNTech vaccine.

Ms Shortall called on the Taoiseach and Minister for Health to explain the “very substantial gap” and to make a commitment to publish the daily figures for the number of doses received and available, in addition to the figures already being made available for the injected doses.

She pointed out that in the past seven days, an average of just over 12,000 vaccines has been administered each day.

“We need to up that by nearly four times the amount if we are to be ready for the rollout programme on a mass basis.”

Mr Martin said he would ask the taskforce about the difference. He said “there have, without question, been bumps along the way” but he insisted that supply was the issue “across the board”.

They had to reconfigure following the public health recommendation to provide the Pfizer/BioNTech and Moderna vaccines to the over-70s and the AstraZeneca vaccine to those under 70.

He added that they were “on target to substantially administer the first dose to 72,000 over-85s” by the end of this week and arrangements were being made to vaccinate homebound elderly people in conjunction with GPs and local community teams.

“That will be followed with the sub-cohort of people aged 80-84. By the end of this week, approximately 1,200 GP practices will have participated in the vaccine programme.”