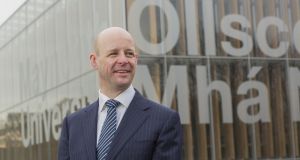 Philip Nolan, president of Maynooth University, says the new InSPIREurope alliances aims to support scholars who are at risk due to discrimination, persecution or violence.

A new European initiative to support hundreds of academics whose lives or careers are at risk due to discrimination, persecution or violence is to be based out of Maynooth University.

A record number of academics are seeking support, such as teaching temporary posts, due threats against their lives or careers in countries such as Turkey, Syria, Iran and Yemen.

A new Europe-wide alliance for researchers at risk - InSPIREurope - will be hosted at Maynooth University in Ireland.

Risk
The initiative, coordinated by the Scholars at Risk organisation and funded by the European Commission, will seek to organise research or teaching posts to allow academics at risk to continue their work.

Prof Philip Nolan, president of Maynooth University, said it recognised the central importance of academic freedom in scholarship, research and teaching for the promotion and protection of democracy.

“Together with our European partners, we recognise our shared responsibility to support scholars who are at risk due to discrimination, persecution or violence. With this ambitious Europe-wide initiative, we hope to make a difference,” he said.

Maynooth University will host the European office of the global Scholars at Risk network.

Growing numbers of academics have been seeking support due to conflict or repressive regimes.

In the year or so, more than 580 scholars and researchers sought the assistance of Scholars at Risk. The organisation placed 115 scholars at universities around the world.

Forced out
Sinead O’Gorman, director, Scholars at Risk Europe, said the organisation in more recent times is seeing scholars at risk within the borders of the EU in countries such as Hungary and Poland.

For example, the Central European University says it has been forced out of Hungary and moved it main campus to Vienna last month.

This followed a refusal by the Hungarian government to ratify an agreement that would allow it to continue to offer US degree programs.

The move was widely seen as a targeted attack by Hungary’s government on the university’s founder and honorary board chairman, financier George Soros.

Poland’s government - often compared to its widely criticised counterpart in Hungary - has sparked a wave of protest by students and academics fearful of political interference from university reforms.

Ms O’Gorman said a number if EU countries - such as France and Germany - offer dedicated funding to provide temporary posts for scholars at risk around the world.

She urged the Irish Government to consider similar steps to ensure more highly qualified academics who are at risk for various reasons can continue their work in Ireland.

She said that when researchers are at risk and excluded from participating in the global research circuit, not only are individual lives and careers at risk, but the quality and the very future of research is also at stake.

Ms O’Gorman said the skills of highly qualified academics who are at risk represent significant economic potential for the receiving countries in Europe.

However, well-coordinated efforts by a diverse set of partners are required for this potential to be realised on a Europe-wide scale.

The threats to academic freedom within Europe, she said, should be wake-up call for everyone.