Analysis: What’s the point of an arts degree? 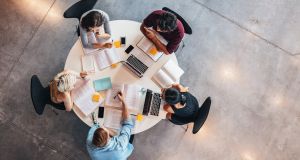 Arts graduates are among the least likely to be in employment nine months after graduating, and among the most likely to be studying for a post-graduate qualification. Photograph: Getty Images

You’ve probably heard the joke before: science students spend their careers asking “why does it work?”; engineering graduates ponder “how does it work?”; while arts graduates, ask : “do you want fries with that?

Gags about arts graduates and Mcjobs may be old, but the latest facts show not a lot has changed: students with degrees in arts are less likely to find work linked to their qualification and are more likely to earn significantly less.

A Higher Education Authority survey released earlier this year found that graduates with arts and humanities degrees were the least well paid, with 21 per cent earning less than €13,000.

It is little surprise, then, that points have been dropping for arts courses as students – or their parents – see better job prospects elsewhere.

Some universities are now responding by shaking up their arts courses and adding a greater emphasis on employment opportunities through internships, research or study abroad options.

So, what’s the point of an arts degree these days and why would anyone want to do one?

“With arts graduates, it may take them longer to get there, but when they do, they reach senior positions within organisations,” he says.

“Starting salaries are not as good, but after five years arts graduates can and do earn good money.”

Arts graduates who have a foreign language are also in high demand: someone with a degree in, for example, German or Spanish with philosophy, will be snapped up for work.

Policy-makers, however, seem obsessed with herding ever-greater numbers away from arts and towards science, technology, engineering and maths subjects. The thinking at official level seems to be that these are the disciplines our graduates need to excel in if Ireland is to survive the global war on talent.

“The irony is that neglecting the arts and humanities will put us on a dangerously narrow path for the future,” says Prof Jane Ohlmeyer, director of the Trinity Long Room Hub and the Erasmus Smith’s professor of modern history at Trinity.

“In the arts and humanities – disciplines that include everything from classics to cultural studies and ecumenics to English – we educate our students to think critically, to ask awkward questions, to challenge orthodoxies and to explore what is distinctive about Irish, European and global history and culture.

“Skills such as creativity and an ability to think strategically ensure our graduates will be well-equipped to compete with the advanced robotic and automated work practices of the future.”

Another irony is that – at a time of concern about Irish colleges sliding down international rankings – the arts and humanities are areas where Irish higher education excels globally.

At UCD, for example, its arts and humanities programmes are ranked in the world’s top-100, while its English language and literature ranked in the top 50, according to figures compiled by rankings agency QS.

A spokeswoman says its success to date has been through continuous curriculum development and renewal. The new programmes due to come on stream in 2018 are aimed at “enhancing students’ educational and employment opportunities.”