Long division: Are we doing enough to narrow the inequality gap in Irish schools? 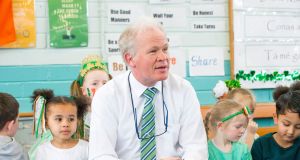 It’s a short distance from Knocknaheeny on Cork’s northside to the gates of University College Cork. But it’s a route that crosses some of the deepest ravines of the country’s social divide.

Along with the high levels of unemployment, only one in 10 young people living in the area go on to third-level education. In more affluent areas, up to nine in 10 follow this route.

Ger O’Donovan is principal of St Mary’s on the Hill in Knocknaheeny. His school is one of about 900 that are part of the Deis scheme, a targeted initiative to combat educational disadvantage.

St Mary’s is classified as an “urban band one” school, which means it has the highest concentration of disadvantage in the education system.

The programme is a recognition of education’s unique capacity to break down cycles of disadvantage – but is it working?

And are these supports really doing enough to narrow the gap between the haves and have-nots?

O’Donovan says the extra resources the school receives are hugely important, but says his school still faces an uphill struggle to even begin to compete with others.

For starters, the schools doesn’t usually seek voluntary contributions from parents. This is the kind of funding that helps pay energy bills, for school repairs or equipment.

Students with additional needs are also more likely to be reliant on over-stretched public services for educational assessments and supports.

This, O’Donovan says, can lead to crucial delays in securing early intervention for pupils with conditions such as autism.

“In other, more affluent areas, parents can seek out a private assessment for their child and access services,” he says.

“We had one occasion where the student was waiting 3½ years for an assessment after been referred in Early Start [a pre-school service],” says O’Donovan.

In some cases, the school has been forced to enlist the help of the local St Vincent de Paul to pay for private assessments.

“That’s not to say our children suffer. We have huge success stories. We do things like Music Generation, Club Ceoil, we have gymnastics, GAA, swimming . . . It’s just that we struggle behind the scenes , especially in getting those extra therapeutic supports for individual children.”

Research on the impact of Deis schools points to some encouraging outcomes, with significant literacy and numeracy improvements. However, scores across all primary schools have also improved.

As a result, there has been little significant narrowing in the gap between middle-class children in non-Deis primary schools and disadvantaged pupils.

These gaps maintain educational inequality and restrict social mobility for those living within disadvantaged communities.

“When you look into the numbers you can see that nationally everyone has improved but the gap is not closing between the outcome irrespective of the investment of money in Deis,” says Katriona O’Sullivan, lecturer at Maynooth University.

She says the programme needs to be revisited to ensure it provides more targeted and intensive supports.

“We need to broaden Deis and be more creative with it,” she says.

Waiting lists for educational or psychological assessments is another area that O’Donovan identifies as requiring some of this creative attention.

Notwithstanding this, some simple interventions are yielding encouraging results.

The introduction of an attendance initiative at St Mary’s has resulted in a 6 per cent increase in attendance within the school recently.

“Punctuality drives and attendance would be a huge thing here,” says O’Donovan.

“The lord mayor presents certificates to high attendees and we have a monthly initiative where we ask the kids did they ‘stay in the 90s?’ . . . Month on month, year on year, we are above 90 per cent attendance.”

The Early Start programme, O’Donovan says, is the most important of all Deis initiatives.

This pre-school intervention programme was established in schools of designated urban disadvantage.

“The earlier you can get to the child the more benefit it is going to have,” says O’Donovan.

Research has shown that the impact pre-school has on cognitive, behavioural and social-emotional outcomes is still apparent at the age of 16.

Katriona O’Sullivan agrees that early intervention is essential but stresses the importance of increasing support for students in the early years of their post-primary education too.

“I was angry, I was depressed, I was scared, and teachers didn’t know and didn’t care. They just wanted me to learn Shakespeare,” explains O’Sullivan in relation to her own experience in school.

“There is a lack of understanding and awareness of how you actually empower a young person who is struggling. That’s one of the issues and there is no training to help you understand the nuances of disadvantage,” says O’Sullivan.

She believes this lack of understanding often leads to young people from disadvantaged communities prematurely disengaging from post-primary school.

O’Sullivan highlights the need for a shift in our expectations of students in relation to progression to third-level.

“They don’t expect it of themselves. The system doesn’t expect it from them. There are too many students who talk about just one person who believed in them,” she says.

The promotion of a college culture is one way to initiate this shift and St Joseph’s Secondary School in Rush, north Co Dublin, has been proactive in its efforts to do.

St Joseph’s, a Deis band one school, has a student population that draws from 25 different nationalities.

“It was about 10 years ago that changes started to happen in the school in terms of upping our progression on to third-level and really focusing on students reaching their potential,” says Daragh Nealon, deputy principal at St Joseph’s.

The school runs a college awareness week with activities for each year group. First years, for example, take part in “speed careers”.

“It’s like speed dating. We get people from 40 different careers into the school. The students spend about five minutes in small groups with each profession, getting advice about college and other advice they give to get into that profession.”

The introduction of the Trinity Access Programme (TAP) has also transformed the mindset within the school.

“It really was where we saw a change. It started getting our students into Trinity College from first or second year,” says Nealon.

Creating a link between school subject choice and college courses as early as first or second year is one way of fostering these aspirations.

“We know it’s working because our progression rates to college are going up all the time,” says Nealon.

The school has a current progression rate of 71 per cent to third-level and 92 per cent of students progress on to further education. Prior to introducing these initiatives, the progression rate was at 14 per cent

Nealon also stresses the importance of the peer factor in changing attitudes within the school. Initially, it was difficult to convince students to take part in the initiatives.

“Nobody had beaten the path before, there was a fear factor, a belief that ‘I don’t belong’,” says Nealon, “but their peers are now coming back and talking to them about college – that has a huge impact.”

College is now part of the everyday language in the school. “Their feelings about school and outlook towards the future is increasing because of these initiatives,” says Nealon.