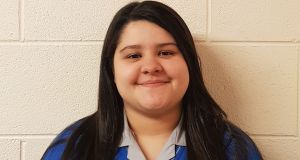 Sara Morais, 19, a Leaving Cert student in Gort, Co Galway, has appealed to authorities to help resolve her legal status so she can attend university. Photograph: RTÉ Raidió na Gaeltachta

The students, all Brazilian, arrived in Ireland as children during the economic boom years and have spent a decade or more at primary and secondary level .

In most cases, their parents came here on holiday visas but have been working in the Galway area since as undocumented workers in sectors such as construction and hospitality.

At Gort Community College, 16 of the 60 students due to sit the Leaving Cert this year are Brazilian; half of them are undocumented.

Sara Morais, 19, from Gort, Co Galway, came to Ireland from Brazil at the age of seven.

She discovered last year she would not be eligible to go to college due to her undocumented status. Ms Morais had hoped to study biomedical sciences after the Leaving Cert.

“I’ve been told it won’t be sorted out anytime soon... My sister is in fifth year and will be doing the Leaving Cert next year, so she could also end up in the same situation as me,” she said.

Ms Morais, whose story was first reported by RTÉ Raidió na Gaeltachta on Tuesday, has been hailed as an “outstanding” pupil and is sitting all her Leaving Cert subjects – including Irish – at higher level.

“Her commitment to learning is second to none,” said Margaret Geraghty, a support teacher at the school.

“She has gone through school with calmness and dignity. She has taken in the country, the culture and has excelled at everything, including Irish.”

She has lost out on several weeks of her Leaving Cert preparations this year caring for her mother, who has been ill.

“I attend doctors’ appointments with her still. Everyday that I miss I try to recover and catch up, so that I don’t fall behind,” she said.

Ms Morais added that both of her parents have been working and paying tax for the past 12 years.

She said her parents have been seeking to regularise their status with immigration authorities for the past two years or so without success.

Olivia Fahy, an Irish teacher, said it was unfair that Ms Morais and other students at the school faced such uncertainty after their exams.

“After the Leaving Cert they won’t have a chance to go any further with their education and it’s a great pity. As teachers here, we’re trying to highlight this problem. We want to find out what we can do for the pupils,” she said.

Ms Geraghty said three undocumented Brazilian girls, in particular, have flourished and hoped they could secure places under the “university of sanctuary” .

Currently DCU, University Limerick, UCC, and UCD have been recognised as “universities of sanctuary” by providing places for refugee or asylum-seeking students. Athlone IT is the first college of sanctuary in Ireland.

“The students have an awful lot to contribute to society,” Ms Geraghty said. “If they could access college locally, it would be great. It simply doesn’t make sense to deny them access to education.”