Covid-19: Schools will not close early for Christmas – Norma Foley 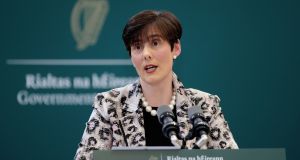 Schools will not close early before Christmas because they remain safe places for children despite a number of recent high-profile Covid-19 outbreaks, the Minister for Education, Norma Foley, has said.

Sixty-two Covid-19 cases were found in schools in the State last week, following mass testing in a number of them, with 3.5 per cent of the samples taken proving positive, compared to 10 to 12 per cent in the wider community.

Saying that three-quarters of schools have not any issues at all since the reopening in September, the Minister said “tremendous work” has been done by school staff and students.

Ruling out calls for an early closure and for an extra week after Christmas, the Minister said there are no public health grounds for schools to remain closed for longer than is planned.

“From the very beginning we’ve been very clear we would follow the public health advice as it is laid down, and we’ve followed it completely and entirely,’ she said.

A third school - Scoil Íosagáin in Buncrana, Co Donegal - also told parents that its plans to close on Friday following an outbreak had been rejected.

“We find it hard to believe that our board of management cannot make a decision to protect the health and wellbeing of our school community in the days leading up to Christmas,” the school wrote in a message to parents.

There were 19 Covid-19 outbreaks, involving 62 cases, in schools last week – a rise of five on the week before and the highest number recorded since before the midterm break, when 44 were logged.

Some 1,700 students and teachers were tested last week. The positivity rate among close contacts climbed from 2.5 per cent to 3.5 per cent, which is slightly higher than when schools closed for the October midterm break.

The data is contained in the Health Protection Surveillance Centre’s weekly report on coronavirus clusters in Ireland covering the week ending December 12th.

Transmission of Covid-19 within the schools has not necessarily been established, according to the Health Protection Surveillance Centre in its latest report covering up to December 12th.

Last week’s outbreaks include Claremorris Boys National School in Co Mayo, which was blocked from closing by the Department of Education even though it had 16 cases amongst students.

All pupils and staff at Scoil Mhuire Killorglin are being tested for Covid-19, with all children asked to remain at home until December 30th after 17 confirmed cases.

Saying that “an outbreak of this scale” is uncommon in schools, HSE South told parents that 17 cases at the mixed primary school of 386 pupils have been recorded so far.

It said school management had implemented and continued to implement appropriate Covid control measures, while cases and close contacts have been isolating.

Praising the “immediate action” of the HSE, the chairman of the school’s board of management, Jerome Conway, said: “It just flew through the school.”

Urging people to follow the safety rules, including wearing masks and social distancing, Mr Conway said: “It is a lesson to everybody we must respect this virus and take the necessary steps.”

Up to 200 families, including staff and pupils, in Killorglin and surrounding areas are affected by the movement restrictions order, but the closely-knit town is “rallying around”, said one parent, Glen Evans.

“Friends are doing the shopping for us. The community is rallying,” Mr Evans went on, “The main thing is we get out the other side of this. The closure of the school was the commonsense thing to do.”