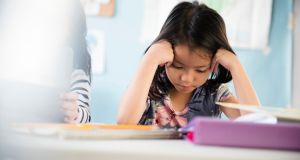 The findings are contained in Children’s School Lives, a landmark study which is following 4,000 children across almost 200 schools. It was carried out by researchers at University College Dublin’s school of education.

The research contains new insights into the experience of children, teachers and parents during the Covid-19 prompted lockdown period from March onwards.

The most common amount of time children spent on remote learning at home, as reported by parents, was 10-30 minutes a day.

Teachers and principals expressed particular concerns over the engagement of children and families in marginalised communities. Parents recounted experiences of working long hours themselves and struggling to get into a routine for home learning.

The activities that children most frequently spent most time on during the day, as rated by parents, were home learning, playing games on a digital device, playing outside, watching TV and playing with toys. Activities that were less frequent included reading for pleasure, doing arts and crafts, helping with chores, musical activity and indoor fitness.

The researchers say it is difficult to quantify what degree of learning loss may have occurred during school closures, but this will be the subject of future reports.

Teachers reported spending the same or more amount of time teaching maths, English and PE during the lockdown.

However, other subjects were taught less, while drama, art, religious education and music were more often temporarily postponed.

Most parents surveyed were satisfied with the amount of work set by teachers, but in interviews they expressed concerns that remote learning could not replace learning at school and that their children could be falling behind.

Most teachers and principals said they felt stressed by their jobs during the lockdown, although they also felt a high degree of job satisfaction at the time of the survey. Many principals reported working much longer hours than normal and described the challenges of multi-tasking and managing the school in line with Government guidance.

Nearly all teachers set work for children during the week, with around two thirds using an online teaching platform such as Seesaw or Padlet.

A minority of teachers – about a third – used video technology with children in their class.

Less than half of principals said their school was sufficiently resourced with digital technology in advance of the lockdown.

Most parents, teachers and principals had never or hardly ever used video conferencing before the school closure, and most parents and teachers had never or rarely used an online educational platform.

The research was commissioned by the National Council for Curriculum and Assessment and led by Prof Dympna Devine, Associate Prof Jennifer Symonds and Assistant Prof Seaneen Sloan.

Prof Devine said the study provides a robust evidence base, rooted in the voices of children, of what is happening in our primary schools.

“It highlights the centrality of primary schools to community in Ireland, including during times of national crisis, and the breadth and diversity of experiences that exist across our primary school sector,” she said.

“It provides a unique window with which to capture change in children’s experiences over time that will be instrumental to evidenced-based curriculum reform.”

Minister for Education Norma Foley said the “innovative research gives a unique insight into the experiences of primary school children and will further inform policy making within this crucial area”.