Key indicator of coronavirus trends shows each case diagnosed over the past week has had 3.8 contacts 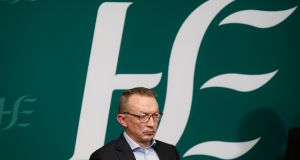 The number of close contacts of a case, a key indicator of Covid-19 trends, has started to rise again, according to the Health Service Executive.

Each case diagnosed over the past week has had 3.8 contacts, while the while the test positivity rate has also increased, from 2.5 per cent to 2.9 per cent, HSE clinical officer Dr Colm Henry said.

Dr Henry said this was not surprising given the opening of society adding that it was too early to say whether growth rates would continue upwards.

With the country facing into another critical period, he said that if people don’t reduce contacts and “suffocate” the virus at every opportunity, it will transmit people individuals, in households and between generations.

Urging the public to be on their “maximum level of watch” heading into Christmas, HSE chief executive Paul Reid warned of a “high-risk multiplier effect” from “three concerning ingredients”.

These were an increase in cases, an increase in test positivity and a possible massive rise in the number of contacts of cases if people socialise over Christmas.

Combined with the increased demand on hospital services at this time of the year, and the “disproportionate” effect Covid-19 can have on hospitals in terms of bed and ward closures, this was “a dangerous mix”.

Mr Reid again appealed to people to keep their contact to the lowest level possible, to limit family visits and to protect the vulnerable above all. He warned that it “wouldn’t work” for people to have a high number of contacts over Christmas and then to limit them afterwards.

While welcoming news of a vaccine, Dr Henry said this did not mean “it’s all over” or that “we have a cure” or can let up on public health measures.

“If you’re taking risks this weekend, and you’re visiting older relatives next week, you are putting their lives at risk,” he told a media briefing.

“Only meet people indoors who you trust with your life,” he said. “When they arrive, welcome them with alcohol. This time it will be hand gel.”

He said the best way for people to have a safe Christmas was to make their indoor “bubble” as small as possible.

Wearing a mask while cooking and opening the windows was unlikely to stop transmission with guests if the rest of the time was spent together at the dinner-table, watching television or playing a board-game, he said.

The HSE has as yet received no request for support from the North’s health service due to their high Covid-19 numbers, but will consider one if it is made, Mr Reid said.

Currently there are 211 Covid-19 patients in hospital, including 27 in intensive care.

Mr Reid said the details around the supply of the Pfizer/BioNTech vaccine have still not been “completely nailed down” in terms of timing and volume.

Almost 5,000 doses are due to arrive in a first assignment but the HSE is in discussions with Pfizer about increasing this amount, he said. Thereafter, it was expect further supplies would arrive every week or 10 days.

Price was not an issue in the negotiations and sufficient stocks of syringes and needles are available, he said.

Contracts for the IT system to underpin the vaccine rollout are being finalised, he told the briefing.

The rollout will be the first national project to use an individual health identifier from the start to the end of the process, according to Mr Reid.

The number of tests carried out last week increased 30 per cent over the previous week, with 82,000 tests performed in laboratories.