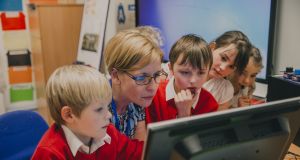 Standardised tests were also cited as a worry for pupils, parents and teachers alike. Photograph: iStock

Is the school around the corner still the same?

A new landmark study published today shows just how much primary school has changed – and stayed the same.

Anxiety among pupils appears to be a very modern phenomenon and an issue of rising concern.

Teachers, but especially principals, referred to increasing levels of worry among children arising from changing family and societal structures, including poverty, family breakdown and working life.

Standardised tests were also cited as a worry for pupils, parents and teachers alike.

The impact of digital technologies was also noted as a concern in terms of the impact of extensive screen time on learning and safety.

There are also concerns about how pressure on parents may be negatively affecting children’s education at home.

Most second-class pupils surveyed reported that they were never or rarely read to at home.

One teacher commented: “I think it’s dying [going to bed with a story] ... There’s such a wealth of language and repetition of phrases – technology comes at a huge price, because if they don’t have the words, feelings, everything is through the same prism.”

Classrooms, like society, are much more diverse than in the past, and this is seen as one of the hallmarks and strengths of schools.

The vast majority of principals indicated they had some children from immigrant families in their schools, as well as refugees and Travellers.

Most principals also reported having some children with learning or intellectual disabilities in their schools.

The voice of the child also emerges strongly: many feel they are consulted and have a meaningful input into their learning and wider school rules.

The closure of schools earlier this year during the lockdown prompted a move towards online learning.

The report shows how this changed learning environment impacted positively and negatively on children, their families, teachers and school leaders.

On the plus side, most were motivated to use digital technologies and enjoyed doing so.

Most children were very positive about the quality of communication they received about remote learning and happy with the pace and spread of subjects being taught.

However parents, teachers and principals were less positive overall. Parents struggled to make time for children to do work. Teachers spoke of their uncertainty over how parents or children were engaging with learning material, and of their reluctance to follow up given concerns over pressuring them.

And what hasn’t changed?

Teaching hours are similar and, physically, schools are largely unchanged. Schools are still at the very centre of local communities.

The quality of relationships between children and their teachers, and teachers and parents, emerge as highly significant and important.