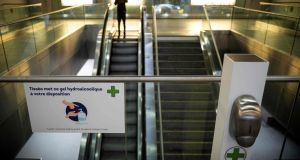 A hydroalcoholic gel distributor is pictured in a metro station, on May 15th in Toulouse, France as France. Photograph: Lionel Bonaventure/AFP via Getty

The global death toll from Covid-19 has passed 300,000, with nearly 4.5 million people infected. According to data collected by Johns Hopkins University, at least 302,452 people have now died as a result of the outbreak.

The institution says it has counted 4,443,597 confirmed cases worldwide. It’s important to point out that the actual death toll is believed to be far higher than the tally compiled from government figures.

France’s new coronavirus deaths reported on Friday were three times lower than 24 hours earlier while new confirmed cases of the Covid-19 disease kept on rising at the same slow rate of 0.4 per cent, as the country continues to unwind its lockdown.

In a statement, the health ministry said there were 104 new fatalities compared to 351 on Thursday, bringing the total to 27,529, still the fourth-highest in the world, after those of the United States, Britain and Italy, and just ahead of Spain.

“The Covid-19 epidemic is still active in France so must we remain cautious,” the ministry said, also mentioning the case of a 9-year-old boy who died a week ago in the southern town of Marseille after developing a syndrome akin to Kawasaki disease and being in contact with the coronavirus though not suffering from any of its symptoms.

This new life-threatening inflammatory syndrome associated with Covid-19 has affected 230 children in Europe and killed two so far this year, the second fatality having occurred in Britain.

Both numbers - key indicators for the French health system’s ability to cope with the epidemic - have been on a downtrend for four to five weeks and peaked at over 32,000 and over 7,000 respectively in early to mid-April.

China has gone a month without announcing any new deaths from the coronavirus. The National Health Commission reported four new cases of the virus on Friday, all local cross-infections in the northeastern province of Jilin where a cluster of uncertain origin has been detected in recent days. The last time the commission reported a death was on April 14th.

US president Donald Trump signalled a further deterioration of his relationship with China over coronavirus, saying he has no interest in speaking to president Xi Jinping at the moment and going so far as to suggest he could cut ties with the world’s second largest economy. Chinese state media has responded saying his comments are “lunacy”.

Mr Trump toured a mask distribution centre in the political swing state of Pennsylvania on Thursday but without wearing a mask himself. Mr Trump, who is running for re-election in November, has resisted wearing a mask in public despite his administration’s guidance to Americans to wear them and new White House rules requiring staff to wear them at work.

Portugal will reopen its beaches on June 6th, prime minister Antonio Costa said on Friday, and he encouraged the public to download an app that will tell them if their beach of choice is full or still has space.

Groups must stay 1.5 metres apart, deck-chairs may only be booked for the morning or afternoon, and beach sports of two people or more will not be allowed, according to the new rules.

But the police will not be keeping watch, Mr Costa said, urging people to adhere to the measures by themselves. “Beaches should be places of leisure,” Mr Costa said. “We have to be checking ourselves.”

The Portuguese agency for the environment has developed an app that will use real-time mobile phone data and numbers submitted by beach businesses to establish how many people are on beaches at any given time.

The government is working with phone operators to collect data not just on the number of people on the beaches but also how spread out they are, Costa said.

The country is due to launch the second phase of a sector-by-sector plan to reopen the economy on Monday, with restaurants, museums and coffee shops reopening at reduced capacity and schools resuming for some year groups.

Portugal allowed smaller shops to open and lifted travel restrictions on May 4th, but the spread of the virus does not appear to have accelerated, according to data from the ministry of health.

The virus reproduction rate - dubbed “R” - was 0.94 two weeks ago and remains below 1 at 0.97, with the number of people in hospitals and intensive care unit beds varying by just a few percentage points.

Portugal has reported 28,583 confirmed cases of the new coronavirus and 1,190 deaths, a very low toll in contrast with neighbouring Spain’s 27,000 fatalities.

The lockdown has reversing the economy’s growth trajectory to a 3.9 per cent contraction in the first quarter compared with the same period last year, data from the National Institute of Statistics (INE) showed on Friday.

“Unemployment has increased very significantly. That’s why it’s important we follow these measures . . . so people have the confidence to go back out,” Mr Costa said.

The slide in GDP was largely due to a big drop in tourism, with the number of people staying in holiday accommodation falling by 60 per cent in March and 18 per cent in the first quarter as a whole compared with the figures for last year, INE’s data showed.

“It’s going to be tough. . . The costs are all still there but revenue will only return very gradually,” Jose Theotonio, CEO of the country’s biggest hotel group Pestana, which is due to re-open some of its 71 closed hotels in June, said on Friday.

Mexico’s health ministry on Thursday confirmed 257 additional coronavirus deaths and 2,409 new infections, the biggest one-day rise in cases since the pandemic began.The new infections brought confirmed coronavirus cases to 42,595 and 4,477 deaths in total, according to the official tally.

The health ministers of South Korea, China and Japan will get together by video conference on Friday to discuss ways to work together in the global campaign against the novel coronavirus, South Korean officials said. The meeting is the first between top health officials of the East Asian neighbours since the outbreak emerged in the central Chinese city of Wuhan late last year.

Doctors in Italy and France report spike in rare inflammatory syndrome linked to coronavirusDoctors in northern Italy,one of the areas hardest hit by coronavirus, and in France have reported spikes in cases of a rare inflammatory syndrome in young children that appears similar to one reported in the US, Britain and Spain, according to a report in the Lancet.The condition shares symptoms with toxic shock and Kawasaki disease including fever, rashes, swollen glands and, in severe cases, heart inflammation.

A Rohingya man has become the first person to test positive for Covid-19 in the vast refugee camps in Bangladesh that is home to almost one million people. Local health coordinator Abu Toha Bhuiyan initially said two refugees had been put into isolation. The World Health Organization later said one case was of a Rohingya man, and the other was of a local man who lived near the camp and was being treated at a clinic inside the area.

Another 3 million Americans filed for benefits, bringing the country’s total unemployed to 36 million. The latest figures from the Department of Labor show the rate of claims is slowing but the record-breaking pace of layoffs has already pushed unemployment to levels unseen since the Great Depression of the 1930s. –Guardian

In Russia, which currently has the second most infections worldwide with 252,245, authorities in Moscow said clinics would begin mass random testing of residents for coronavirus antibodies on Friday. There have been doubts over the official death toll from the virus of 2,305, after authorities ascribed the deaths of more than 60 per cent of coronavirus patients in April to other causes.

The Baltic states of Lithuania, Latvia and Estonia, on Russia’s western edge, opened their borders to each other at the stroke of midnight on Friday, creating the first “travel bubble” within the European Union in a bid to jump-start economies broken down by the coronavirus pandemic.

Citizens and residents of the three generally sparsely populated countries will be free to travel within the region, though anyone entering from outside will need to self-isolate for 14 days.

“The Baltic travel bubble is an opportunity for businesses to reopen, and a glimmer of hope for the people that life is getting back to normal,” Lithuanian prime minister Saulius Skvernelis said in a statement.

Qatar has made wearing a face mask compulsory for anyone who steps outside their home, with violators facing jail time and fines of up to $55,000.

Vietnam reported 24 new coronavirus infections on Friday, all of which were imported cases involving Vietnamese citizens returning from Russia who were placed under quarantine on arrival, the country’s health ministry said.

Coronavirus has reached one of the world’s biggest refugee camps in Bangladesh.

The US has voiced alarm at the targeting of religious minorities in India and Pakistan, warning against a search for internal scapegoats during the pandemic.

Residents in Australia’s most populous state of New South Wales experienced slightly relaxed Covid-19 restrictions, with outside gatherings of 10 people permitted, up from two. Bars, cafes and restaurants have reopened, but only 10 people can be inside at any one time, with strict distancing rules enforced.

New Zealand residents have embraced newfound freedoms, including eating out, seeing friends, and a lot of haircuts, after restrictions were reduced. – Agencies