Clonkeen College is challenging order’s decision to sell 7.5 acres of its playing fields 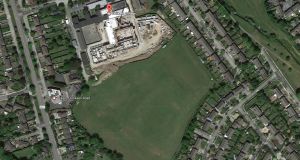 The Christian Brothers have expressed their “enormous disappointment” at the decision of the board of management of Clonkeen College in south Dublin to take legal action over the sale of its playing fields.

The board lodged legal proceedings in the High Court last month and has secured a lis pendens, or notice of the existence of a legal dispute, in relation to the disputed property.

The congregation said it was “enormously disappointed that the board of management has sought to take legal action against its most consistent and significant benefactor”.

It said that, as the matter was now before the courts, it would not be appropriate for it to comment further. It is understood the Brothers now want the case to proceed to hearing as soon as possible.

The decision by the congregation to sell 7.5 acres of playing fields used by the Deansgrange school is being resisted by the board, which says the lands constitute an intrinsic and essential element of the life of the school.

The congregation is selling the property for a reported €18 million to local homebuilder Patrick Durkan snr. Some €10 million of the money will go to the redress scheme for victims of historical institutional abuse, while the Edmund Rice Schools Trust, which owns Clonkeen, will get €4 million and the school will get €1.3 million.

The school board claims it had an agreement with the congregation, since 2006, that the playing fields would be available to the school so long as it was operating as a school, a position the congregation rejects.

The board also differs with the congregation over the issue of whether a sale has already concluded.

The voluntary members of the board of management have been forced to issue legal proceedings against the congregation as a result of their refusal to honour an explicit agreement that lands at the school would be for the use of the school for so long as there was a school in operation, the board said.

It has made a number of recent requests for a copy of the purported contract for sale in respect of the lands, which have been “ignored”, it said.

Correspondence received from the congregation expressing concern the claims being made could delay the sale of the “surplus lands” are being pointed to by the board as supporting its view that the sale is not yet completed.