Over a third of students in Ireland face ‘severe financial problems’ 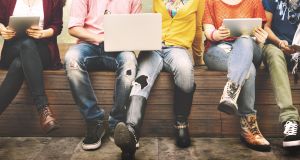 The average monthly income for all third-level students is €754 while the average expenditure is €832, the study found. Photograph: iStock

Over a third of higher-education students in Ireland experience “severe financial problems”, according to a new study of student living conditions.

About 36 per cent of the total student population say they are in severe financially difficulty, with the problem at its most severe among older students. Over 40 per cent of students above the age of 24 say they struggle with money.

The average monthly income for all third-level students is €754 while the average expenditure is €832. Forty-two per cent of expenditure is met by someone other than the student, such as a parent or partner.

Postgraduate and full-time undergraduate students are now more reliant on financial support from parents or others than they were five years ago. This is likely a symptom of the economic recovery – parents now have greater means to support children in third-level education, meaning the students don’t have to get part-time jobs.

The findings are contained in the latest Eurostudent study, an ongoing project which tracks changes in the living conditions of third-level students.

According to the study, the number of students in higher education has increased by 7.8 per cent since 2013. The gender balance is relatively even but female students still tend to enrol in education, social sciences, humanities and arts courses while men gravitate towards engineering, manufacturing, maths and computing.

Males are more likely to attend institutes of technology while a higher proportion of females are found at universities.

Mature students account for 22 per cent of the total student population and have an average age of 36.

Students who live in campus halls of residence report spending less time studying than those living in other forms of accommodation.

The Eurostudent study found most students are happy with the standard of their education and say they “fit into higher education”.

However, 36 percent of students feel like they are “detached consumers” rather than “partners in education”. A similar proportion feel lecturers are not concerned with their learning progress.