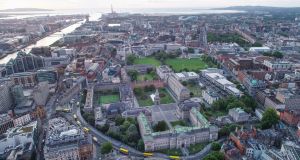 Trinity College Dublin: A blueprint envisages opening up the campus with a series of new pedestrian entrances to forge closer links with the city around it

Trinity College Dublin is planning to open up some of its imposing high perimeter walls to create new “public gateways” into the country’s oldest university.

The college, which started out as an enclosed campus, has long been criticised for its neglect of surrounding areas such as Pearse Street.

A blueprint envisages opening up the campus with a series of new pedestrian entrances to forge closer links with the city around it.

There will also be a series of landmark buildings – some currently under construction – aimed at modernising ageing facilities and breathing new life into the surrounding streetscapes.

“I’ve spoken to people who’ve lived and worked in the capital their whole lives. Often, their first time in Trinity may not occur until they are in their 40s or 50s,” she said.

Work is under way on a €62 million Printing House Square development on Pearse Street which will provide 250 student rooms. It will also feature a new public gateway into a new “public city square”.

An €80 million Trinity Business School is also taking shape on Pearse Street, which will include a pedestrian entrance and public cafe.

Plans for a new law school building – also likely to open out onto Pearse Street – are also under discussion.

“We have two million visitors a year who enjoy the campus or sit out with their sandwiches in the summer,” Prof Campbell said. “We want our university to be a place that people walk around. It’s a balancing act we need to strike, due to security, litter and so on.”

The college’s estates strategy also envisages expanding eastwards, with the creation of a new technology campus near Grand Canal Dock.

If demand for space continues, the blueprint says it should seek to strategically acquire land between the existing campus and Grand Canal Dock.