Work needs to be done in telling parents how workplace is changing, conference hears 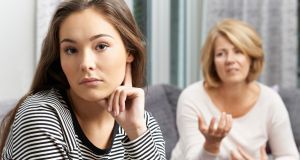 The gathering heard that student career decisions are made on the basis, more or less, on what their mother tells them, not their father. File photograph: Getty Images

Mothers are the single biggest influence on students choosing their career options even though they may be out of touch with developments in work and education, a conference has heard.

The rise of automation and robotics – dubbed the “fourth industrial revolution” – is disrupting the world of work and will result in workers changing jobs and reskilling on a much more regular basis, according to experts.

However, Vivienne Patterson, head of skills at the Higher Education Authority, said mothers who may not be familiar with these shifts play a central role in their children’s career choices.

“All of students’ decisions are made on the basis, more or less, on what their mother tells them. That came out quite recently in our review of career guidance. It is overwhelmingly the mother, for some reason not the father . . . ”

Findings on the influence on students’ career choices emerged in research linked to a Department of Education-commissioned review of career guidance, which has yet to be published.

Ms Patterson said work needs to be done in communicating with parents on how the workplace is changing and what is likely to be required of students in the future.

Demand for job-ready graduates was rising, for example, and new types of apprenticeships are providing students with a chance to gain degrees while getting valuable work experience.

She was speaking at the “work of the future” summit in Dublin Castle on Thursday, organised by the Higher Education Authority and Massachusetts Institute of Technology (MIT).

It examined the “global megatrends” that will have an impact on skills required by graduates in the future.

Chief executive of the Economic and Social Research Institute Alan Barrett said the Government should consider giving tax breaks to workers to help them upskill and adapt to changes in the workplace.

He said people starting into their careers can expect to work until their 70s or beyond and would benefit from greater access to lifelong learning.

“You can imagine a situation of rather than deciding at the age of 20 what it is you’re going to study, we’ll have to engineer a culture and systems that allow people to continually retrain,” he said.

“As we look towards old age,we give tax breaks to people who put money into their pensions. Do we need over time to be equally generous from the tax system if people invest . . . in their human capital?”

While debate over technology has led to gloomy predictions that robots and automation will replace jobs, the conference heard there are factors which may counteract this.

Professor of management at MIT John Van Reenensaid the so-called “Uber-effect” of cheaper or better products can lead to a rise in employment.

While taxi use in New York has fallen in recent years, the overall numbers using ride-sharing services has increased dramatically.

While research to date does not indicate any rise in unemployment, there is a bigger issue with the quality of jobs, such as wages and hours worked, said Prof Van Reenen.

In addition, there is evidence of a “jobs polarisation” in the level of skills demanded in the modern workplace.

US data indicates there has been growth in low-skill and high-skill jobs over the past 40 years, but demand for medium-skill levels has shrunk.

While Stem, or science and technology, is often held up as the areas where new jobs are being created, he said latest data does not support this.

In fact, occupations with the highest growth levels in the US in recent years are areas where technical and interpersonal skills are required, such as teaching, health and management.