Points have gone up for courses linked to growing economy 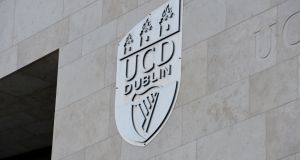 Entry to the degree course in business and law in UCD is up nine points, to 529. Photograph: Alan Betson

The confidence engendered by the growing strength of the Irish economy is reflected in the CAO points requirements published this morning.

The areas where the number of applications increased most sharply – construction, business, law – all see points increases, for the most part.

Given that there is a totally new CAO points scale this year, alongside a new grading system, it is not surprising that only a small number of courses have the same points requirements as in 2016.

Overall, most level-eight degree courses have seen a decrease in points requirements this year, but this does not necessarily reflect a drop in demand among applicants. It may be a reflection of the new grading system taking effect or sharp growth in the number of places available on individual programmes.

The confidence in construction-related careers is reflected in programmes such as architecture in DIT which is up 30, as is planning, geography and the environment in UCD.

Confidence in the opportunity economic growth will bring to legal firms has seen demand for places and points increases across the board in law. Law is up seven in Trinity to 542, law and society is up five in DCU to 455. Business and law in UCD is up nine to 529.

Business programmes themselves, which offer 8,920 level-eight places this morning– representing more than 20 per cent of overall places at this level – have also seen increased demand for places, and thus higher points requirements this year.

Medicine Medical and paramedical careers have retained strong demand with occupational therapy up 11 in NUI Galway to 531, physiotherapy in UL is up 10 to 565 and by eight in Trinity to 543* and three in UCD to 553.

Speech and language therapy in UCC is up eight to 523. Human nutrition and dietetics is up four in the DIT to 554. Veterinary medicine in UCD is down six to 564.

Nursing is down in points requirements in 34 programmes, but may also be linked to the fact that the number of places has increased by several hundred due to a Department of Health decision to restore places removed as an economic measure in 2012.

Similarly, radiography in UCD is down 26 to 509, due totally to an increase in place numbers, to deal with an acute shortage of staff in the sector.

Applicant numbers for teaching are down in 2017. This decrease is reflected in points requirements at both second level and to a lesser extent at primary.

Home Economics with Irish in St Angela’s is down 36 to 409, but their other three programmes, which link home economics with economics, biology and religious education, are relatively unchanged.

The three programmes previously offered by Mater Dei, which have now been integrated into DCU, are all down considerably.

The largest programmes at level-eight honours degree are, once again, in arts/social sciences. Some 12,362 places are being offered in this area today.

Applicants have not associated career opportunities generated by economic growth as strongly with an arts degree as with other programmes.

Demand for science degree places has eased in 2017 and this again is reflected in points requirements. Nonetheless, they still account for a large chunk of places – some 6,660.

Science in down across a numbers of universities such as Maynooth, Trinity, UCD and DCU.

UCC’s biological and chemical sciences programme is up nine to 489. Computer science points requirements are down eight and seven respectively in UCD and, in DIT, to 477 and 443.

Engineering programmes offer 5,272 places, or more than 12 per cent of level-eight programmes.

Points requirements have dropped considerably this year, reflecting a loss of interest among applicants, which will be a matter of some serious concern to the Government, which is keen to increase the supply of high-quality graduates in this field.

CIT bucks the trend with an increase in points requirement for its biomedical engineering programme (CR520) up 14 to 444.

*Denotes entry is based on random selection