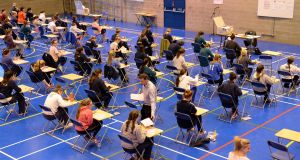 Some 80,766 applicants have applied for a place in higher education this year through the CAO system. Photograph: Eric Luke

The number of CAO points required for entry into more than half of all honours degree college courses has dropped.

The trend indicates that changes to exam grading and an overhaul of the points system may be helping to take some of the heat out of the points race.

Nursing, teaching and engineering recorded significant reductions in points, though much of this is linked to lower numbers of applications.

The drop in demand for engineering, as well as many science degrees, is likely to be of concern to the Government, which is anxious to increase the supply of graduates to help tackle a “skills crisis” facing the sector.

By contrast, points have increased across many courses linked to the growing economy such as construction, architecture, law and business.

Architecture, for example, sees some of the sharpest rises, as have other university-level construction courses with increase of between 15 and 30 points.

Some of the highest-points courses, such as medicine and dentistry, meanwhile, have all increased slightly.

Arts remains the most popular course in the country with slight points increases and decreases across individual colleges.

Thousands of students have been waiting for today’s offers of college places with uncertainty given new changes to exam grading and an overhaul of the CAO points system.

Although points have fallen for a majority of courses, academics say the difference from last year is not dramatic and falls broadly within what they expected.

Significantly, the new system has more than halved the number of courses where students who secured the points required did not get an offer due to a process known as random selection.

Philip Nolan, chair of the Irish Universities Association (IUA) and president of Maynooth University, said the early signs of success should build confidence for further reform of the system.

“This shows that carefully considered reform of the points system works and can improve the system,” he said.

Mr Nolan said it should also lend support for changes to the way Leaving Cert students are assessed, as well as moves to broaden entry routes in courses.

In addition, he said it was time to examine the potential for bonus points for other subjects – such as languages, physics or sciences – in addition to maths.

Under this year’s reforms, the old system of 14 grades – As, Bs, Cs, etc – has been replaced by a simpler system with just eight grades – H1s, H2s and H3s – separated by bands of about 10 per cent.

The CAO points scale is also broader and no longer increases in multiples of five points. Instead, the gap between grades varies from between 12 and eight points.

While points reductions are linked to reductions in applications as well as the grading reforms, many courses may be down due to other factors.

A fall in points for nursing courses, for example, is likely to be linked to an increased allocation of places after the Government raised austerity-era caps aimed at limiting the number of graduates.

Engineering is likely to be down as a result of fewer applications and an increase in minimum entry requirements in maths across many courses may also have impacted on a drop in points.

Under the old system, for example, a candidate needed a minimum of 55 per cent in higher maths to secure an engineering place. This has been raised to 60 per cent (a H4) under the new grading and points system.

In all, some 80,766 applicants have applied for a place in higher education this year through the CAO system, a figure similar to last year.

The bulk – just over 56,000 – sat the Leaving Cert during the summer, while the remainder are a combination of mature students, deferrals or those have applied through alternative routes.