Will schools remain open during the six-week lockdown?

Frustration is mounting among school staff over testing and tracing delays 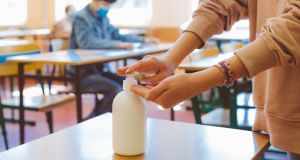 Maintaining low levels of infection in schools will depend on how well the wider community does in holding off a broader spread in the population. Photograph: iStock

Not so long ago there were siren voices warning that schools could become vectors of coronavirus infection when they reopened.

But, two months on, latest official data paints an encouraging picture: schools are significantly safer places than the wider community.

So far there have been 73 outbreaks – that is, two or more cases – in schools out of about 4,000-plus primary and secondary schools, according to latest statistics.

A total of 10,513 students and teachers have been mass tested, typically following a positive case detected in a school setting. These tests have yielded a further 246 cases.

This shows a positive Covid-19 detection rate in schools of 2 per cent, compared to more than 7 per cent in the wider community.

All of this indicates that schools are, in relative terms, bright spots as the pandemic’s grip strengthens elsewhere.

However, maintaining low levels of infection in schools will depend on how well the wider community does in holding off a broader spread in the population.

While the reopening of schools has been a success story, there is mounting frustration among many school leaders and staff over long delays in testing and tracking and inconsistencies over what constitutes a “close contact”.

Some schools have begun to take matters into their own hands and have sent home students on a precautionary basis.

The principal of Tarbert Comprehensive School in Co Kerry, for example, decided to close after seven confirmed cases in recent days, along with 45 close contacts. The school was ordered to reopen by the department on Tuesday on the basis that a full closure was not warranted by health authorities.

St Mary’s National School in Crosserlough, Co Cavan, for example, advised parents on Monday that due to rising cases in the community and delays responding to them, families had the option of keeping their children at home and work would be assigned to them.

Hartstown Community School in Dublin 15, which recorded its third case earlier this week, said it had been informed that public health authorities were “inundated” with calls. Instead of waiting for an update from the HSE for notifications on of any close contacts, it asked parents to contact the school directly if they had been notified.

All signs are that the testing and tracing system is creaking under strain of the pandemic. Teachers’ unions want these delays to be tackled if schools are to operate on a sustainable basis. The Association of Secondary Teachers’ Ireland is also due to receive the results of a ballot for industrial action later this week over issues of concern including turnaround times for testing.

Clearly, issues around communication will need to tackled to ensure schools are notified swiftly of cases and close contacts; clearer protocols which define close contacts and testing criteria may also be needed.

Otherwise, there is every risk that the support from unions – so crucial to keeping schools open – will evaporate and threaten the reopening of schools after the midterm break.