About 1,000 school secretaries to strike on Friday

Offer of 1.5% pay rise rejected by union Fórsa as ‘one we can only describe as insulting’ 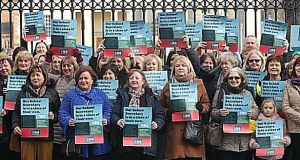 Some 1,000 school secretaries are to stage a one-day strike on Friday as part of a resumed campaign of industrial action over a controversial two-tier pay system.

The trade union Fórsa said the stoppage would be followed by a resumption of a work-to-rule by school secretaries which was suspended last October to facilitate discussions at the Workplace Relations Commission.

Minister for Education Joe McHugh on Thursday appealed to the union to defer the planned industrial action and to re-engage in talks.

The union said under the existing two-tier pay system most school secretaries earned just €12,500 a year, with irregular, short-term contracts that forced them to sign on during the summer holidays and other school breaks.

The union said that while a minority of school secretaries were directly employed by the Department of Education and had public service employment status, the majority had their pay and conditions determined by school management boards.

Fórsa said it represented more than half of the estimated 2,000 school secretaries employed directly by their school’s board of management and paid from the school’s ancillary grant.

As part of the work-to-rule, school secretaries are expected to withdraw from work on public service systems and databases.

The union said they would also refuse to carry out the functions of public servants.

“This is because they have repeatedly been refused public service pay and conditions over the last four decades.”

The Minister said: “The Department of Education and Skills and the Department of Public Expenditure and Reform are reflecting on the latest discussions. But we are disappointed that the union is pushing ahead with industrial action which will impact on the day-to-day operation of schools, including potentially the pay of teachers and special needs assistants.

Talks aimed at resolving the issue commenced at the commission last October but ended unsuccessfully in December.

Fórsa head of education Andy Pike said the Department of Education had failed to bring forward any proposals on pay capable of resolving the issue.

“The offer to school secretaries was 1.5 per cent. An offer we can only describe as insulting.”

Unions representing teachers are backing the Fórsa strike, however school classes are expected to operate as normal.