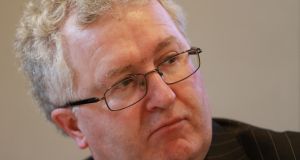 The report into the attendance of Supreme Court judge Séamus Woulfe at the Oireachtas golf dinner has expressed the view he did not break any law and that seeking his resignation would be unjust and disproportionate.

Former Chief Justice Susan Denham is also understood to have concluded the matter can be dealt with informally by the Chief Justice.

She is believed to have expressed the view Mr Justice Woulfe should have attended the golf event without attending the dinner and should not have accepted the dinner invite.

It is understood she considered he failed to consider in advance of attending the dinner whether his attendance, as a Supreme Court Judge, at a celebratory dinner in a hotel, in a public place, in the middle of a pandemic, might be an impropriety, or might create the appearance of an impropriety, to reasonable members of the public.

In spite of her views on those matters, she also considered there are mitigating factors, including that he did not break any law or knowingly breach any guidelines on the day of the event.

His failure to reflect on whether his attendance as a judge of the Supreme Court might cause controversy and bring the Supreme Court into disrepute had to be seen in light of factors including that he was a newly appointed judge and had not yet sat as a Supreme Court judge, as well as the absence of relevant guidelines or a judicial code of conduct that could have helped him deal with the situation.

Ms Denham took the view that nothing the judge did involved impropriety such as would justify calls for his resignation from office and such a step would be unjust and disproportionate.

The report into into the controversy was due to be published on Thursday following a meeting of the Supreme Court and the Judicial Council.

In August, the court asked Ms Denham to carry out a review concerning the Supreme Court judge’s attendance at the event in Clifden, Co Galway.

Ms Denham was asked to consider whether Mr Justice Woulfe should, in all the circumstances, have left the hotel in light of the situation prevailing and whether he should have played golf without attending the dinner.

Mr Justice Woulfe, the former attorney general, was among more than 80 guests who attended a dinner on August 19th after two days of golf. The event at the Co Galway hotel went ahead despite Covid-19 public health guidelines placing limits on indoor gatherings. It was attended by several TDs and Senators, along with former TDs and senators.

The controversy surrounding the event has led to the resignation of Fianna Fáil TD Dara Calleary as minister for agriculture and Phil Hogan as European commissioner.

Political sources acknowledged that the politicians forced to resign over the controversy - including but not limited to Mr Calleary and Mr Hogan - might feel hard done by given the leniency extended to Mr Justice Woulfe.

Ms Justice Denham’s report is expected to conclude that Mr Justice Woulfe was reasonably entitled to rely on the organisers’ assurances that the event would be in compliance with the regulations on Covid-19.

While some politicians also made this argument in their defence, the extent of the angry public reaction led to a clamour for their resignations.

Several senators resigned their parties’ whips, while the leas-cathaoirleach of the Seanad, Cork Senator Jerry Buttimer, also resigned his position.