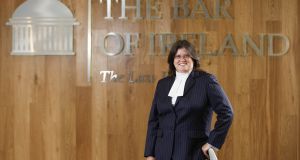 Maura McNally says it is wrong to think most barristers are wealthy. Photograph: Conor McCabe

The majority of the State’s barristers are facing a stark challenge to the financial viability of their chosen career, the new Chair of the Council of the Bar of Ireland, Maura McNally SC, has said.

The situation caused by the Covid-19 pandemic means that her primary objective in the coming year “is that the Bar of Ireland is still here at the end of that twelve months.”

Ms McNally, who took up her role last month, said that if she is re-elected for a second year as chair, which is standard practice, her objective would be “to make sure that the Bar is still there at the end of that second year.”

A huge drop in income was the stark reality facing the approximately 2,200 members of the Bar, she said, adding that it was a plight they shared with many other people who were self-employed.

The continued existence of an independent Bar was an important issue for society, as it ensured the right of access for ordinary people to the best legal brains in the State, she said.

The “vast, vast majority” of the membership of the Bar were ordinary people, who prior to the pandemic were making modest or ordinary incomes practicing in the District and Circuit Courts.

“It is no longer the perception that people seem to have, of these grey-faced, claret-drinking, cigar-smoking, balding fat men running the Law Library and Bar of Ireland,” she said.

“The profession is reflective of society as we know it. I really believe that, not only from the socio-economic perspective, but also the gender perspective, the sexual orientation perspective, and the race perspective.”

She said the situation was by no means perfect but that progress was being made.

Ms McNally, who is only the second women ever to hold the position of chair, is also gay. She said being gay has not been an issue in her career as a barrister. “Or if it has been, maybe I just didn’t notice.”

The first female chair of the council, the late Ms Justice Mella Carroll, was elected 41 years ago.

Ms McNally said she decided to go for the position because she had believed for a long time that it was important for the future of the Bar that it was reflective of society and that it was time the council had a female chair.

She said it was wrong to think that most barristers were wealthy just because some had very high incomes.

“You could use that same logic and say all authors are millionaires because J K Rowling is a millionaire”.

Ms McNally is from Co Leitrim, where her father was a publican and her mother a schoolteacher.