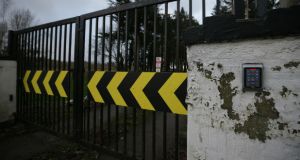 Since the Thornton Hall prison site was acquired almost €20 million has been spent on consultancy and legal fees along with works. File photograph: Nick Bradshaw

The site once destined to be the State’s first ‘super prison’ now looks set to be used to ease the housing crisis.

More than €51 million has been spent on the 165-acre Thornton Hall site to date, though plans to build a large prison there have been abandoned and the bulk of the site has now been offered to the State’s new house building body.

The Land Development Agency was established last autumn to build 150,000 homes over the next two decades in response to the housing crisis.

The Department of Justice confirmed the move last night in reply to queries from The Irish Times about expenditure on the north Co Dublin site now having ceased.

The department suggested a smaller prison could still be built on the site as well as an adjacent housing development.

“The department has offered the bulk of the site to the new Land Development Agency and proposed the retention of a portion for any future prison development needs,” it said. “Whether the site is suitable for housing or other uses is not a matter for the Department of Justice and Equality, it is for the relevant planning experts to judge.”

A request under the Freedom of Information Act (FoI) to the prison service revealed while almost €51 million has been spent on the site since 2005, all expenditure has now stopped apart from payments for security patrols in the area.

Works to install access roads and vital services to the site, such as sewers, continued to be carried out for years after a deal with a consortium to build the jail collapsed in 2009.

However, a breakdown of expenditure on the lands, obtained under FoI, reveals all of those works have now ceased.

Some €1,000 per week was spent last year, all on security patrols. The figures also reveal 2016 was the last year there was any expenditure on works at the site.

The development prompted Fianna Fáil housing spokesman Darragh O’Brien to say the site had been “mothballed”.

Mr O’Brien, in whose Dublin Fingal constituency the lands are located, said it was clear from the figures supplied to The Irish Times the lands had been “forgotten about”.

This, he said, was despite it being a serviced and vacant State-owned tract of land very close to Dublin city and airport at a time when housing was badly needed.

Plans of 15 years ago

When this was put to the department, a spokesman said the large prison originally envisaged in 2005 by the then government was now regarded, in modern penal policy terms, as “counterproductive”.

Plans to build a jail that would house up to 2,200 prisoners were devised 15 years ago under then minister for justice Michael McDowell.

Since the site was acquired almost €20 million has been spent on consultancy and legal fees along with works, before they stopped two years ago.

Minister for Justice Charlie Flanagan last November all but confirmed plans for a super prison at Thornton Hall had been abandoned.

He said since the lands at Kilsallaghan were acquired in 2005, smaller jails were found to be much more successful in rehabilitating prisoners.

A spokesman for the Department of Housing and Local Government was last night unable to say when the Land Development Agency would complete its assessment of the lands.

While part of the agency’s remit is to regenerate underutilised sites, ensuring the construction of thousands of new homes is its immediate priority.