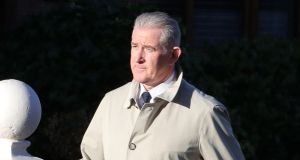 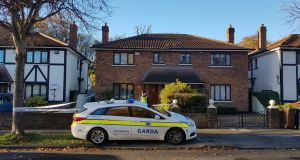 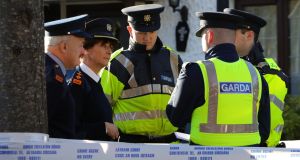 Gardaí near a house in Tudor Lawns in Foxrock, Co Dublin, where the body of a man in his 20s was found. Potograph: Collins 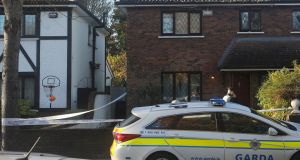 Gardaí outside a house in Tudor Lawns in Foxrock, Co Dublin. Photograph: Collins

A woman in her 40s has been arrested in connection with the killing of a young man whose mutilated body was found at what investigators described as an “especially gruesome” crime scene in Foxrock, Co Dublin.

The body was discovered after gardaí and other emergency services were called to a house in the Tudor Lawns estate next to Leopardstown Racecourse at about 11.30pm on Thursday. The victim had suffered severe stab injuries and was pronounced dead a short time later.

Neighbours said the semi-detached house was rented, there had been a large turnover of tenants in recent years and that large parties were regularly held there.

Gardaí from Cabinteely had been called to the property on several previous occasions to deal with public order incidents and one neighbour said officers had visited the house on Thursday afternoon.

The deceased, who is in his 20s, and the arrested woman are understood to be from Malawi and Kenya* respectively and are well-known to each other. One line of enquiry is he was killed following an argument.

Gardaí are not seeking anyone else in relation to the killing but have interviewed several people who were present at the house, where it is understood alcohol and drugs were being consumed prior to the fatal incident.

A Garda source said the crime scene was “especially gruesome and messy”. It is understood some of the man’s body parts were removed although it is not clear if this occurred before or after his death.

The scene was “problematic” due to the amount of blood present, the source said, but gardaí do not believe it was a planned killing despite it being seen as a savage and prolonged attack.

Members of the Garda Technical Bureau were still examining the scene when the man’s body was removed to the State Pathologist’s Office in Whitehall, where Deputy State Pathologist Linda Mulligan was to perform a postmortem. Ms Mulligan had visited the scene earlier yesterday.

Pat Leahy, Assistant Garda Commissioner for the Dublin Metropolitan region, held a case conference with gardaí at the scene on Friday and officers later carried out door to door inquiries.

Some residents of the estate took down Halloween decorations that were hanging outside their homes as a mark of respect for what had happened.

“I heard about 11.30pm last night. I was taking my make-up off and saw there were flashing lights and a great big firetruck and squad cars and a critical care ambulance,” said a woman who lives a doors away from the house. “When I saw the crime ticker tape this morning I knew it was a crime scene.”

Another man described the estate as a “settled” neighbourhood and said the inhabitants of the house did not mix very much with other locals.

“Two of the guys would be quite friendly and would say hello to you but other than that they wouldn’t be well known,” he said. “It’s an awful tragedy. It seems to be happening every day now. It was Kildare yesterday and Cork then earlier in the week.”

Local councillor Chris Curran described what had happened as “horrific”.

“The one thing about Tudor Lawns in particular and Leopardstown Road is its a very, very quiet neighbourhood,” he said. “We never have incidents in Tudor Lawns. There’s never a problem with it.”

The woman was being questioned at Dún Laoghaire Garda station on Friday night after being arrested under Section 4 of the Criminal Justice Act, 1984. She can be held for 24 hours before being charged or released.