PAC chairman claims changes will lead to a ‘reduction in policing’ 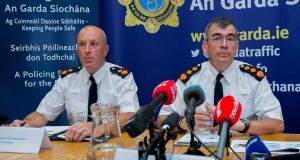 Government-backed plans to reshape the Garda’s organisational structure are facing a rural backlash with a number of TDs, Garda representative organisations and community bodies raising concerns over the plans.

Under the most radical shake-up of the force since its foundation, several Garda divisions will be amalgamated into larger areas.

The plan, announced by Garda Commissioner Drew Harris on Thursday, risks sparking a series of political turf wars, with politicians raising fears that control of the new Garda divisions would be geographically remote from communities which, they said, had already borne the brunt of cutbacks in the past decade.

Seán Fleming, Fianna Fáil TD for Laois-Offaly and chairman of the Dáil’s powerful Public Accounts Committee, claimed the changes would lead to “a reduction in policing”. He said the decisions should have been made at Cabinet, rather than by Garda leadership.

“The amalgamation of various divisions is going to result in chief superintendents being further removed from activity on the ground under this regime,” he said. Under the plan, Laois-Offaly will be jointly administered with Kildare.

His party colleague, James Browne, said there were similar fears in his Wexford constituency. Mr Browne said he believed the operational headquarters of the new Wicklow-Wexford division would inevitably be located in Bray, “which is at least a two-hour drive from the south of Wexford”.

His constituency rival, Minister of State for Finance Michael D’Arcy, said he supported the policy, but added that he would be opposed to the divisional headquarters being located in Bray. “I think the divisional HQ should be smack bang in the middle of the division if at all possible,” he said.

Mr Harris will next week undertake a round of talks with Garda representative associations which have voiced concerns about the reforms. He will hold separate meetings with chief superintendents, superintendents and senior civilian managers to discuss his plans and to take questions.

After meeting those senior members, he is due to undertake a tour of the regions, starting next week, where he will brief local gardaí. Regional visits will also be conducted by Deputy Commissioner John Twomey and the Garda’s chief administrative officer, Joe Nugent.

“The Munitir view is we welcome reform and a focus on community policing, but we do have concerns on how it might be implemented.” He said concerns were focused on local accountability, community policing and the size of the new divisions.

Mayo Fianna Fáil TD Dara Calleary also said he was concerned about the plans, pointing to the large size of the proposed Mayo-Roscommon-Longford division. “From the tip of Blacksod to the edge of Mullingar, that’s 170 miles, and three very different counties.”

Peadar Tóibín, leader of Aontú and a Meath TD, said on Sundays there were five gardaí on duty in his constituency. “If those gardaí have to travel greater distance . . . it’s a greater opportunity for areas to be vacant.”

“The Garda HQ at Donegal and Sligo are of strategic importance. With or without a deal on Brexit, there will clearly be an increased demand on Garda strategic resources. Also, the rising threat of dissident activity as seen in the Fermanagh border and the ever-present threat of rural crime,” he said.

Minister for Justice Charlie Flanagan defended the new policy. “This is not political policing. This is allowing the Garda Commissioner and his team to get on with his job,” he said.

“Crime trends change through the decades. We want to ensure while our local Garda complement continues to be rooted in communities, there is expertise to deal with cyber crime, and the growing and challenging area of sexual offences which we need to tackle head on.”