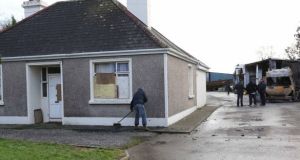 The scene on Tuesday at the house in Strokestown, Co Roscommon, which was the centre of then eviction. Photograph: Brian Farrell

Gardaí investigating an attack on security men who evicted the McGann family from their Co Roscommon home on behalf of KBC bank have arrested two men and seized a gun.

The two suspects were being questioned at Castlerea Garda station on Wednesday afternoon in connection with the attack by up to 20 men in the early hours of Sunday morning.

Gardaí believe dissident republicans were involved in the attack, with others.

The two arrests are the first of what is expected to be a large number. Investigating gardaí believe they know the identity of the men involved.

A group of up to 20 men arrived at the McGann property in Falsk near Strokestown in a cattle truck, blocking an access road behind them.

The group was armed with baseball bats and beat the eight security workers, whose four vans and two cars were also set on fire. A dog was also killed during the incident.

After the attack, the security workers were either taken to hospital or left the house. On Monday, the McGann siblings moved back into the property.

The attack by the vigilante group followed four days after the McGanns were evicted from their home by the security workers.

In the days that followed, the security men remained at the house in an apparent bid to secure it and prevent the McGanns, or any other party, moving into it.

They were at the property, ensuring that it remained in KBC’s possession, when the gang arrived in the early hours of Sunday.

An investigation into the attack has been under way since last Sunday. It is being carried out by local gardaí in Roscommon and national Garda units.

Detectives are working on the suspicion some of the gang are from the Roscommon area while other men were drafted in from further afield to aid what was a carefully planned raid.

Garda sources said while there is disquiet in the area about the way last Wednesday’s eviction was carried out, they suspect the fact the security men involved were from Northern Ireland was the prime motivation for the attack on them.

Garda sources said the gang who carried out the attack believed the security workers have British military backgrounds, which has added to tensions on the area.

The investigation being conducted by the Garda resulted in a number of searches being carried out on Wednesday morning at properties in Co Roscommon.

“During the operation four separate locations, including houses and out-houses ,were searched,” the Garda said. “One firearm was recovered and a number of vehicles including a lorry and teleporter were seized.

“Two men aged in their 50s and 60s were arrested and are currently detained under Section 30 of the Offences against the State Act,1939 at Castlerea Garda station.”

There were also searches in Dublin and Meath on Monday and the Special Detective Unit, which investigates terrorists, seized items including documents and phones as part of the investigation.

Chief Supt Tony Healy from Castlerea Garda station said his officers had been assisted by the general public.

“We would again like to thank the community for their continued support following recent events in Strokestown,” he said.

“And we would again appeal to anyone with information to come forward and contact us here at Castlerea Garda Station.”

The property in Falsk at the centre of the case was owned by farmer Michael Anthony McGann. He and his two adult siblings lived there.

However, KBC has been before the courts with Mr McGann for a decade over an unpaid loan of over €300,000.

The bank was granted a repossession and a possession, or eviction, order some years ago by the High Court. It did not enforce those orders at the time.

But when the loan was not paid KBC returned to the courts in August and was granted further orders, which were executed last Wednesday when the eviction occurred.

The eviction, in which force was used against those who refused to leave, was recorded on camera phones and the resulting footage went viral, which appeared to further stoke tensions in the area.

Garda Commissioner Drew Harris and Minister for Justice Charlie Flanagan both condemned the attack last Sunday and said groups taking the law into their own hands would be pursued.