Potential harassment and child pornography offences to be examined 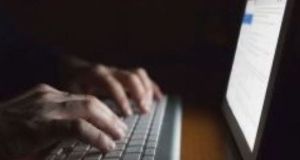 Victims’ Alliance said it had uncovered thousands of sexual images of Irish people being shared on internet forums this week. Photograph: Getty Images

The matter came to public attention on Thursday when Victims’ Alliance, a crime victim advocacy group, said it had uncovered thousands of sexual images of Irish people being shared on internet forums.

Some images appeared to have been taken without the women’s knowledge, such as photos from changing rooms, while others may be of underage girls, the Victims’ Alliance said.

A large number of the images were initially shared consensually by women on subscription services such as OnlyFans before being copied on to forums. Others were images women shared with their partners which were later uploaded online without their permission.

The matter is being investigated by a team from the Garda National Protective Services Bureau which specialises in rape, sexual assault and domestic violence. The Garda National Cybercrime Bureau is also on standby to assist if asked.

As of Friday afternoon, gardaí had yet to receive an official complaint from a person who had their image uploaded.

Linda Hayden of Victims’ Alliance said it hopes the uploaders of the images may be prosecuted for harassment or child abuse imagery offences.

She said she is in the process of handing all the images the group had gathered to gardaí. Many of the forums where the images were shared, including a Discord forum with 500 members, have been taken down, although some remain active.

Ms Hayden said Discord, an online messaging platform, is handing over the IP addresses of 500 forum members to gardaí. The company did not respond to queries on this matter on Friday but said in a separate statement it will “will cooperate on this matter with Irish authorities subject to applicable law”.

The first task for gardaí will be filtering the images to determine if any constitute child abuse imagery.

However even if images are found to be illegal, it will remain very difficult to determine who uploaded them, sources said.

In a handful of past cases gardaí have prosecuted image-based abuse as harassment. But sources warned it would be very hard to put an harassment case together as the law is meant to deal with persistent activity rather than one-off uploading of material.

In previous successful prosecutions, the uploading of material was part of a wider pattern of harassing behaviour such as repeated phone calls.

Gardaí also said the uploading of material from OnlyFans is also unlikely to be prosecuted. “At most it’s a civil matter under copyright law,” a garda said.

Gardaí stressed they take a victim-centric approach to complaints of this nature, despite a lack of clear legislation in the area and will ask pornography companies to remove the material.

“Invariably the company agrees because they have a business to run and don’t really care about one or two images,” a source said.

A Labour Bill outlawing image-based abuse has been before the Oireachtas since 2017.

This week’s reports of mass leaking of Irish women’s images appear to have given the Bill a boost. On Friday, Minister for Justice Helen McEntee said she will bring proposals before Cabinet next week to make it illegal to share “intimate images” without consent “regardless of the motivation of the person who passes them on”.

Meanwhile, Ms Hayden said her group is continuing to go through hundreds of emails it has received from people concerned their images have been shared.

The group is currently examining options to bring a civil case against the uploaders. It is also trying to get a dedicated helpline set up to relieve pressure on Women’s Aid and the Rape Crisis Centre .

“We will take these guys down. Watch us. We will make them know what it’s like to have dread hanging over them. Because we’re absolutely sick of it,” she said.