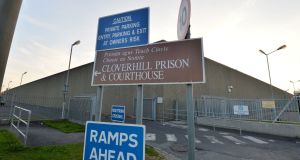 The prisoner had not been let out of the cell at Cloverhill Prison once and the door was opened only for the sole purpose of passing in food. File photograph: The Irish Times

A European committee investigating conditions in Irish prisons found a severely mentally ill inmate lying naked on the floor of his cell, with faeces and urine on the floor and walls.

By that stage the prisoner, identified as PM, had been in a solitary “special observation cell” in Cloverhill Prison for about two weeks without a shower as he awaited transfer to the Central Mental Hospital (CMH).

PM had not been let out of the cell once and the door was only opened for the sole purpose of passing in food, which was done by officers standing behind a shield. There were no blankets in the cell and the man’s poncho was lying beside him covered in urine.

PM was bailed by the High Court to a psychiatric facility in the community two days later, on October 2nd, 2019, by which time he had still not received a shower.

Details of the incident are contained in the latest report on Ireland from the Council of Europe’s Committee for the Prevention of Torture and Inhuman or Degrading Treatment or Punishment (CPT).

The report, which is highly critical of Ireland’s handling of mentally ill prisoners, also detailed the case of another man, MS, who was found in a similarly distressed state and had also not had a shower or been out of his cell in almost two weeks.

He would spend another 10 weeks in a special observation cell before being transferred to the CMH. The High Court had been willing to allow him out on bail to a community psychiatric facility but this facility would not take him because he was homeless.

The CPT noted that “despite both of these men being very unwell” neither had an individual care plan as required under standard procedures. Nursing staff were also unable to gain access to the men as prison staff were unwilling to unlock their cell doors for safety reasons.

About the time of the committee’s visit to Cloverhill’s D2 Landing, which holds mentally ill prisoners, the unit was overflowing. Seven prisoners had to sleep on mattresses on the floor “which the duty doctor confirmed was a regular feature”.

A total of 25 prisoners across the prison system were waiting on beds to open up in the CMH, including 10 on the D2 landing.

The CPT noted prisoners said they were generally treated well by staff. But several complained of physical abuse, including a man who alleged he was punched in the face by an officer in Cork Prison.

The prisoner said he was threatened with transfer to Mountjoy “if he did not keep his mouth shut”. He made a formal complaint which was upheld by an investigator. However, the prison governor disagreed with the finding and no disciplinary actions were taken.

The CPT also expressed disappointment with the new National Violence Reduction Unit in the Midlands Prison, which was established to provide intensive psychological care to the country’s most violent prisoners.

It found the four inmates on the unit regularly spent up to 24 hours a day in their cells and declined to take part in the activities on offer.

The prisoners were offered once-a-week meetings with a psychologist. Two of the inmates considered these inadequate while the other two refused to take part at all.

In response to the report, the Government said mental health in the criminal justice system is a top priority and said work is ongoing to establish a taskforce to increase psychological care in the prison system.

The unit, it said, is in its early stages of operation. The Prison Service is to complete a re-evaluation of its operation and will increase access to meaningful activity for inmates, it said.