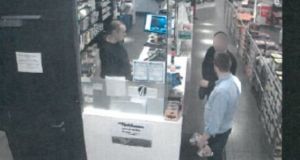 Screengrab taken from CCTV dated 08/10/19 issued by Essex Police of Eamonn Harrison (in blue shirt) with Petrisor Zgarcea. This video has been shown at the Old Bailey, London. Photograph: Essex Police/PA Wire

A lorry driver accused of transporting 39 migrants to their deaths has told jurors he was “naive and gullible”.

Eamonn Harrison (23) ) is alleged to have successfully dropped off two loads of people at Zeebrugge in Belgium before the Vietnamese nationals died in his trailer en route to Purfleet in Essex on October 22nd last year.

Giving evidence at the Old Bailey, Mr Harrison denied people smuggling, saying he only agreed to load stolen lorry parts for his boss Ronan Hughes because he owed him after drunkenly writing off one of his trucks.

He has claimed that a Romanian he knew as Alex, aka Petrisor Zgarcea, was Mr Hughes’ “man on the continent” and he went for a walk when people were loaded on his trailer without his knowledge on two occasions.

Mr Harrison, of Co Down, Northern Ireland, has denied the manslaughter of 39 migrants and being involved in a wider people-smuggling operation.

On October 18th, a delivery of macaroons and bakewell tarts, which were transported in the same trailer as people, were rejected due to human contamination.

Prosecutor Bill Emlyn Jones told Harrison: “You have dreamt up stolen lorry parts because on this night a load of illegal immigrants were smuggled in your trailer.”

Mr Harrison replied that it was “without my knowledge”.

The prosecutor said: “That load when it got to the UK was rejected because of human contamination.”

He asked what Mr Harrison had talked about in a seven minute and 36 second call with Mr Hughes on October 18th.

Mr Harrison said: “I cannot remember exactly. I know he did tell me the load had been rejected and the trailer was coming back to me.”

Mr Emlyn Jones went on: “You can imagine what was on his mind at that time.

“What you have got to talk about is the fact the load he has spent all morning sorting out... was all trodden down and all the biscuits were broken and crushed.

“He does not know the load has been rejected because the load hasn’t got to Sittingbourne.

The defendant denied it, telling jurors: “I was naive and gullible.

“I was to work off the debt with reduction in wage. It would have taken me a year. I did not know I was involved in people smuggling.”

Turning to the fatal trip on October 22nd , Mr Emlyn Jones asserted: “It was a double load of 39 migrants and you have loaded them in two stages.”

The defendant denied it.

Jurors were shown video footage of Mr Harrison walking around the pick-up point near Bierne in northern France that morning.

Mr Emlyn Jones suggested that Mr Harrison had concocted a lie, about being told to go for a walk while migrants were being loaded, from viewing the video.

The prosecutor said: “You have built a lie.

“Your excuse for not knowing what’s happening on the 10th and 17th was you were told to take a walk — a master stroke of subterfuge.

“Hughes tells you to take a walk, you can turn a blind eye to what’s going on in your trailer. It’s based on this clip. You fake a defence around that evidence.”

Mr Harrison has told jurors he was in his cab watching Power on Netflix with his curtains drawn when migrants jumped aboard his trailer on October 22nd.

Mr Emlyn Jones suggested that his walking defence did not work on that occasion because of the evidence of an eyewitness.

The defendant has told the court he initially lied about what happened out of “fear” but decided to tell the truth later.

On Mr Harrison’s movements at the pick-up point, Mr Emlyn Jones said: “You knew perfectly well what you were doing there.

“You’ve already got some of the migrants on board and now you are waiting for the rest to assemble. That’s the delay.

“You have to come back. You have to turn around you have to wait and all because there are more migrants to come on board.

Harrison said: “That’s not the case.”

The prosecutor suggested that amid the “palava” of loading all 39 migrants, a ladder gets forgotten.

Referring to the evidence of a migrant from an earlier run, Mr Emlyn Jones asked: “Did you open the doors give them a gulp of air, a bag to urinate in? Did you bang on the side and give them the signal to huddle in the middle. How did the lorry get back up?”

He denied it, saying he did not know how the ladder moved back.

Concluding his cross-examination, the prosecutor said: “Mr Harrison, those 39 migrants were in your trailer when you dropped them off at Zeebrugge. I am going to suggest you knew full well all along and it’s little wonder if you feel devastated for their families.

“Your priority throughout these proceedings.. is not to tell the truth for them and their families. Your primary concern is yourself.”

The defendant denied it, saying: “I did not know they were there but then at the end of the day they were still in that trailer.

Jurors have heard that Mr Hughes, 41, of Co Armagh, Northern Ireland, has admitted his involvement in the tragedy.–PA