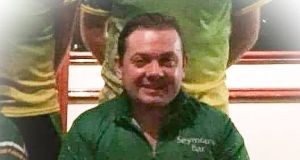 Tributes have been paid to Tipperary man Joe Lawlor who died at the weekend. Photograph: Facebook

Tributes have been paid to a Tipperary man who died at the weekend after the car he was driving crashed into a large tree in the village of Portroe near Lough Derg.

The man, who has been named locally as Joe Lawlor, was found in his car on Sunday at 9.45am in Portroe, Co Tipperary. Mr Lawlor was pronounced dead at the scene and his body was removed to Limerick University Hospital where a post mortem examination is due to be carried out.

Mr Lawlor was a member of Seymour’s Bar Darts Club in the village of Portroe. The club posted on Sunday night that it was “shocked, devastated, heart broken and fighting the tears” following Mr Lawlor’s death.

“Joe Lawlor was not just “The Entertainer” on a darts night, he was a story teller, a singer, a joker, a man who would put you in good form no matter how down you felt,” wrote the post. “Darts will never be the same again, who will put the tunes on? Who will light the place up with their jokes and craic? Seymour’s Darts Club with the heaviest of hearts extend our deepest condolences to the Lawlor family and Joe’s many, many friends. May ‘The Entertainer’ rest in peace.”

Gardaí have appealed for anyone with information about the traffic collision to contact Nenagh Garda Station on 067 50450 or the Garda Confidential Line 1800 666 111.