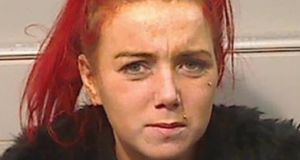 The PSNI said on Thursday that it was now treating the disappearance of Saoirse Smyth (28) as a murder case. Photograph: Police Service of Northern Ireland/PA Wire.

A man has been arrested on suspicion of murder over the disappearance of a woman who was last seen in Belfast in April of last year.

The PSNI is liasing with An Garda Síochána on the case of Saoirse Smyth (28), whose last known movements were traced to Omeath in Co Louth, where she was living. A property in the area was seared on Thursday.

A man (40) was arrested on suspicion of Ms Smyth’s murder in the Newry area on Wednesday.

A missing person appeal was issued last December for Ms Smyth, who was described as having very distinctive red hair.

In a statement, the Smyth family said: “Somebody out there must know something about what has happened to Saoirse and we would plead with anyone who knows anything to contact the police — and Saoirse, if you are out there, please contact your family and let us know you are okay”.

Det Chief Insp Geoff Boyce said the investigation into Ms Smyth’s disappearance “has progressed, and while keeping an open mind I now believe that the potential exists for Saoirse to have sadly been murdered”.

He appealed to anyone with information that may help detectives to come forward.

“Her family deserve to know what has happened to her...I have been in contact with her family who understandably have been left devastated and trained Police Family Liaison Officers are supporting the family at this very difficult time.” - PA