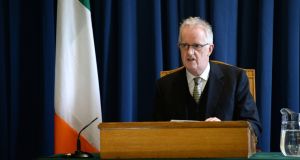 Mr Justice Charleton didn’t hold back in his opinion of Tusla’s filing system. In fact, it could not be dignified by calling it a system, he said. Photograph: Dara Mac Dónaill / The Irish Times

Buried within the 406 pages and 230,000 words of the Disclosures Tribunal report is a section called “Measuring the Pressure”, which describes a system used by the HSE and later Tusla to prioritise child safety files.

What it details is scarcely believable. Under the system, extremely serious cases – such as that of a child being kept at home in a cage – are dealt with immediately. Others involving children not in immediate danger were put in a filing cabinet.

According to Mr Justice Peter Charleton’s report, there was diverging evidence on how this second category of files was handled.

“According to some it was random: once a social worker had free time, he or she went in and plucked out any file. According to others, there was a system, be it chronological or in terms of seriousness or a bit of both.”

The judge didn’t hold back in his opinion of this system. In fact, it cannot be dignified by calling it a system, he said, “given that a low priority file could thus be chosen over a medium priority case”.

Some sections of the report demand to be reread; not because they are complex but because it is difficult to believe such a catalogue of errors could occur with one single file, that of Garda whistleblower Sgt Maurice McCabe, over the course of a few years.

An honest but incredible mistake was made with a file on a previously dismissed complaint of sexual abuse against Sgt McCabe, the judge wrote.

It became a complaint of digital rape. This complaint then went to Tusla which, through a series of errors, managed to make it worse. It was wrongly passed onto gardaí, where it found its way onto the desk of the commissioner.

The error could have been spotted and corrected if Tusla officials had simply read the file properly. Instead, Tusla sent a letter to Sgt McCabe, which was opened by his wife, accusing him of serious sexual assault.

When the sergeant’s solicitors wrote back asking for an explanation, they did not receive a reply for five months. A month later, Tusla transferred the – still incorrect – file to another agency, making it even more unlikely the error would be corrected. *

As an organisation, Tusla arguably comes out of the tribunal even more damaged than the Garda. Immediately after the report’s publication, the agency released a statement apologising again to Sgt McCabe and detailing measures to ensure the mistakes are not repeated.

For many working in the area of child safety, it’s not enough. They’ve seen too many scandals involving Tusla in the four years since it took over child safety matters from the HSE.

In 2015, it emerged Tusla had failed to deal with 660 files which required the allocation of a social worker, including 127 requiring immediate attention.

And in 2016 an internal report revealed more than 225 children could be at risk due to continuing contact with alleged abusers.

Multiple judges prior to Mr Justice Charleton have singled the agency out for criticism for how it dealt with vulnerable children.

Little of this is down to the commitment and skill of the agency’s frontline workers, according to Gareth Noble, a solicitor specialising in children’s rights. Instead, it’s a combination of a lack of resources and completely inadequate management.

“I deal with Tusla every day and what happened in [Sgt McCabe’s case] couldn’t be said to be out of sync of people’s experiences more generally within the organisation,” Mr Noble said. “You can point to example after example. How many times have we heard from Tusla that ‘Our lessons have been learned?’”