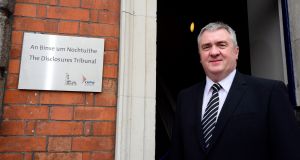 The future of Supt David Taylor in the Garda is being considered by senior management as part of the fallout from the Disclosures Tribunal report.

Damning findings were made against Supt Taylor, whom Mr Justice Peter Charleton said lied in an affidavit when trying to stop a Garda disciplinary inquiry into him and in the protected disclosure that formed the basis of much of the tribunal’s terms of reference.

Supt Taylor was also found to have worked with former Garda commissioner Martin Callinan on a “campaign of calumny” against whistleblower Sgt Maurice McCabe.

That campaign was found to have involved denigrating Sgt McCabe in conversations with politicians, the Comptroller and Auditor General Seamus McCarthy and RTÉ broadcaster Philip Boucher Hayes. Mr Justice Charelton ruled it did not involve negatively briefing crime reporters, as Supt Taylor had alleged.

Garda Commissioner Drew Harris has already said he accepts all of the findings of the Disclosures Tribunal report issued on Thursday. He said he was “establishing a group to examine Mr Justice Charleton’s findings from policy, process, discipline and cultural perspectives to identify the lessons to be learnt and changes to be made”.

The Irish Times has learned that a review group will examine if an internal disciplinary inquiry, or a criminal investigation, should now begin into Supt Taylor.

He had previously been suspended from work while both a criminal inquiry and an internal disciplinary inquiry were conducted into allegations he continued to disclose information to some journalists after he had been transferred out of the Garda Press Office, which he ran, in 2014.

Supt Taylor had taken a judicial review to have that inquiry stopped.

Any Garda member can be dismissed from the force or demoted in rank; in some cases demoted several ranks.

However, Mr Justice Charleton said the procedures for dismissing a Garda member were much too cumbersome and were open to judicial review, which can take years in some cases.

Efforts to contact Supt Taylor for comment were not successful. In reply to queries about Supt Taylor, Garda Headquarters said it could not comment on individual cases.

However, more generally the Garda said Commissioner Harris had last week told the Policing Authority “he intends to reform the Garda disciplinary procedures, but this will involve a change in regulations”.

Garda sources said Garda Keith Harrison, also the subject of tribunal hearings, was currently taking a legal action to stop an internal inquiry into him.

His lawyers are arguing that the Garda inquiry is being conducted into him because of the findings of a previous report of the Disclosures Tribunal which concludes he was unsuited to police work and had sought to challenge his superiors when they tried to ensure he discharged his duties.

The lawyers argue that the Garda Síochána cannot use the findings of a tribunal as the basis for a follow-up investigation.