Victim ‘panicked and screaming’ and ‘people were hiding behind cars’, says witness

Two tourists faced a horrifying ordeal when they were robbed at gunpoint at around 6pm on October 21st at Long’s Place, Dublin, near the Guinness Storehouse. 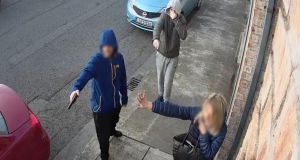 A still photograph from CCTV footage showing the two assailants during the robbery near the Guinness Storehouse.

Gardaí are investigating a robbery on two tourists near the Guinness Storehouse in Dublin during which a gun or imitation gun was used to threaten the victims.

The attack occurred on Long’s Place, Dublin 8, and targeted a man and woman who were part of a large group of foreign tourists .

CCTV footage shows a man and teenager walking alongside people at the back of the group before producing a gun or imitation gun.

A young male who was among the group of tourists then appears to take out his wallet and surrender money.

One of the two attackers was hooded but a large section of his face is caught on the footage.

The second attacker seems younger, perhaps in his mid-teens, and keeps his hand over his face, as well as being hooded.

A woman is also threatened and while she rummages in her bag, apparently looking for something to surrender, she does not give the attackers anything.

As the two victims were at the very back of the large group of tourists, the rest of the group continues walking, apparently unaware what is happening behind them.

However, one of the group then comes back and comes to their aid, comforting her and apparently persuading the two attackers to leave.

Garda Headquarters said Kevin Street gardaí responded to an emergency call and were investigating the incident.

Footage recorded via the CCTV camera and a second clip recorded on the mobile phone of a person in a building close by has been secured by gardaí and is being studied.

Garda sources said it was unclear if the gun was real or a replica, with one adding that an on-street mugging by an attacker using a real firearm would be “very unusual for Dublin”.

“That doesn’t lessen the shock for the victim, though, and they [suspects] would still be charged with firearms offences even if it wasn’t a real gun,” said one source.

No arrests had been made by Tuesday afternoon but gardaí believe the suspects will be identified.

One witness, identified as Mohammed, told RTÉ’s Liveline radio programme he “was in the kitchen and heard loud noises . . . I decided to have a look out the window at these men targeting this woman. They wanted her purse and her money and were just shouting at her. She was really panicked and screaming. People were hiding behind cars. It was crazy.”

Mohammed said the gun “was clearly visible and the attacker was pointing it at her face, he had it in his hands”.

Mohammed said he rang gardaí and told them an armed man was on the street, but said it felt like a long time until they arrived on the scene.

“It felt like it was forever. It was 10 minutes. Everyone had fled by that point.”

Mohammed said one Garda patrol car with two gardaí arrived first, followed by another Garda car which he also believes had two officers in it.

“It was regular gardaí,” he said, adding he did not see an armed-support unit respond. A man identified as Francis, a landlord who owns apartments in the area, said a tenant contacted him and showed him recorded footage.

“I was amazed this could happen in Dublin in broad daylight,” he said.

He said when someone from the group realises what is going on they rush back and stand in front of the gunman, put their hands up and say: ‘don’t shoot, don’t shoot’.”

He said all you can hear is people “screaming ‘don’t shoot’ . . . this is right beside one of the biggest tourist attractions in Ireland.”

Francis said the incident took place beside a national school where children “are at the wall every evening . . . people walking past with dogs, people cycling past. This is crazy”.