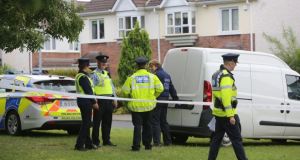 Garda at the scene of the shooting at Griffeen Glen Park, Lucan, in September. Photograph: Gareth Chaney/Collins Photos

Two men have been re-arrested in connection with a shooting that occured in Lucan in September.

The shooting took place in the afternoon on September 4th at Griffeen Glen Park, Lucan.

The victim, a man in his 40s, was in his car when a gunman opened fire, shooting him a number of times through the front windscreen. The man fled to a nearby house where he collapsed from his injuries. He survived the attack.

Gardaí­ investigating the shooting have re-arrested three males (two aged in their 20s and one in his 30s). They are detained at separate Dublin Garda Stations .