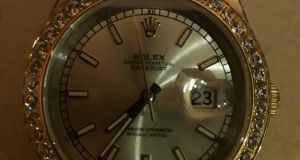 A Rolex watch that was seized in raids by the Criminal Assets Bureau. 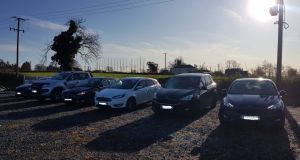 A number of vehicles that were seized in raids by the Criminal Assets Bureau.

Fifty members of the Criminal Assets Bureau, backed by armed gardaí, carried out a coordinated series of searches in eight counties targeting a large family-based network of drug dealers.

More than 100 Garda members were involved in 21 searches which focused on residential addresses and a number of business premises, mainly car dealerships.

The focus of the investigation by Cab is four family groupings based in Co Longford but who part of a larger family-based network through marriage and which has a national reach.

Most of the residential premises searched from before dawn on Thursday were in Longford while other raids were carried out in Offaly, Laois Westmeath, Tipperary, Cavan, Roscommon and Dublin.

A total of five residential premises were raided along with 16 business premises. Gardai believe the chief suspects have been involved in drug dealing from a base in Co Longford but have been active nationally in acquiring assets.

Many of the businesses searched were car dealerships that the suspects are believed to have done business with.

Gardaí were trying to find records relating to the purchase, trade-in and sale of vehicles involving the suspects.

While the purpose of the raids was to gather information about criminal assets and to confiscate any assets suspected of being the proceeds of crime, one man was arrested.

The 21-year-old man was detained by gardaí under the provisions of the Criminal Justice Theft and Fraud Offences Act.

A TuffMac car trailer was also confiscated as well as a car-towing dolly, three Rolex watches and an assortment of designer handbags.

Gardai also found and seized €18,600 in cash while about 40 counterfeit €20 notes were also discovered and taken away as evidence.

A large quantity of financial records was uncovered and taken away for analysis, along with computers and mobile phones.

Garda sources said these records and devices would now be examined to determine the wealth generated by the chief suspects and to discover any cash deposits, property and other assets they may have acquired in recent years.

Drugs paraphernalia was also discovered at some of the search sites on Thursday and taken away as evidence.

The vehicles seized have a combined value of about €120,000. Cocaine valued at €25,000 was also found and freezing orders had been placed on six bank accounts which contained approximately €50,000.

Some of those people linked to the accounts have been in receipt of social welfare and investigations will now be conducted with a view to ceasing those payments in view of the wealth discovered during the raids.

Some of the key suspects being targeted have been involved in feuding in the Longford area.

However, while those men were under investigation locally for that feuding, Thursday’s raids were focused exclusively on the wealth being generated by the gang, with a view to confiscating any assets and cash they hold.

The raids were carried out by Cab supported by the Emergency Response Unit and the Regional Support Unit from the Garda’s Western Region as well as local Garda members based in Co Longford.