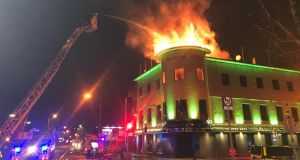 A large fire on the roof of a building housing the Seabank House pub in Dublin’s East Wall was put out overnight.

Dublin Fire Brigade crews were called to the fire at about 12.40am on Thursday. The fire was dealt with by fire-fighters on a turntable ladder, and remaining pockets were extinguished by crews on the roof.

Five units responded to the fire, coming from stations in North Strand, Tara Street, and Donnybrook.

Five units from North Strand, HQ and Donnybrook fought a fire on the roof of a building on East Wall Road. Firefighters on turntable ladder knocked the fire down, and smaller pockets were dealt with by crews sent to the roof. There were no injuries. The first call was at 0040. pic.twitter.com/1VfK8Xi1aX

The Seabank House is on the ground floor of the building on the East Wall Road, north Dublin.

There are a number of apartments in the floors above the pub.

There were no injuries from the fire, according to the Dublin Fire Brigade.

A spokeswoman for An Garda Síochána said a small number of people were evacuating from the building when emergency services arrived, and gardaí were investigating the fire.