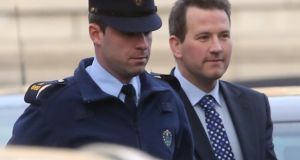 Graham Dwyer arriving at the Four Courts for a Supreme Court hearing in 2013. File photograph: Collins

The Government will consult the Attorney General in the wake of a ruling on Thursday in favour of convicted murderer Graham Dwyer, Minister for Justice Charlie Flanagan has said.

Dwyer won an important legal battle against the State and the Garda Commissioner as part of his bid to overturn his conviction for the murder of Elaine O’Hara. In his action Dwyer, who denies killing Ms O’Hara, a childcare worker, claimed that data gathered from his phone, under the 2011 Communications (Retention of Data) Act, should not have been used at his 2015 trial before the Central Criminal Court. Dwyer, who was not present in court for the ruling, will now use the High Court’s findings as part of his appeal against his conviction.

Mr Flanagan said in a statement after the ruling: “This is a very detailed and lengthy judgment in what is a very complex and dynamic area of the law.

“The Court’s judgment will have to be considered very carefully in order to identify exactly what actions are necessary and the advice of the Attorney General will have to be taken in that regard.”

He added that the “current legal framework allowing for access to communications meta-data to combat criminals and terrorists needs to be modernised in light of evolving jurisprudence.”

Communications meta-data does not include content but involves information such as origin, destination, route, time, date, size, duration or type of underlying service.

Gardaí expected to upgrade investigation into man’s death to murder inquiry 01:45
Private consultants say they are ‘100% committed to fight against Covid-19’ 01:00
Donations of masks, gloves and sanitiser flood in for Derry health workers 01:00
Coronavirus: Public urged to stay at home for Easter 00:23
Keeping their distance: Enclosed nuns attract followers via online Mass 00:10