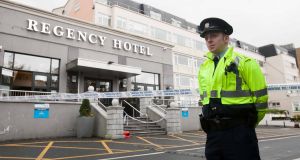 Patrick Hutch has pleaded not guilty to the murder of David Byrne at the Regency Hotel in Dublin in 2016. Photograph: Collins

The Regency Hotel shooting trial will resume “in some form” at the beginning of December, the Special Criminal Court has heard.

Senior prosecuting counsel Sean Gillane SC told the non-jury court on Friday the final report into the death of the lead investigating garda in the Regency Hotel shooting case has been received and he hoped the defence would receive it by the end of the day.

“There is a vast amount of material behind the report that has to be gone through and it will be done early next week,” said Mr Gillane.

The barrister asked the three-judge court to list Patrick Hutch’s (26) case for trial in December.

Justin McQuade BL, for Mr Hutch, said the defence had been previously informed that the report would be available around October 22nd which has left them “further frustrated”. “I understand the prosecution have had it from around that time,” he added.

Mr McQuade further stated that when the defence have considered the report, they will put any views they have in writing to the DPP. “We want to consider our position in the meantime,” said Mr McQuade.

“We can do three days that week,” the judge said, adding that this would give the court in excess of ten days in December to deal with the case.

Mr Justice Hunt said the court could not sit on December 6th, 7th and 11th but it could take the matter up again on December 12th.

Lawyers for Mr Hutch, who is accused of murdering David Byrne (34) at the Regency Hotel in Dublin over two years ago, previously said their client was “frustrated” by the ongoing delays but accepted the process had to be gone through.

Mr Hutch’s trial was adjourned a number of times to allow for a progress report to be outlined to the Special Criminal Court. This report concerned the analysis of electronic data – a mobile phone, two USB devices and a laptop computer - as part of an inquiry into the death of Det Supt Colm Fox.

Det Supt Fox was found dead on the evening of February 10th in his office at Ballymun Garda station.

His official firearm was recovered at the scene, foul play was not suspected and it was treated as a personal tragedy. The trial was stalled at the time over the disclosure by the prosecution of emails between four gardaí.

Mr Hutch of Champions Avenue, Dublin 1, has pleaded not guilty to the murder of David Byrne at the Regency Hotel in Dublin on February 5th, 2016.

He also denies possessing three AK47 assault rifles in connection with the shooting.

The trial was adjourned for a month in February of this year after notes written by the late superintendent were handed into the court and read by the three judges.

Two weeks earlier, the trial had been adjourned when the defence had requested to be provided with copies of emails exchanged between four gardai involved in the case.

The court has previously heard that the shooting took place during a boxing weigh-in at the Regency Hotel, when a man dressed as a woman and another wearing a flat cap, armed with handguns, followed by three people dressed in tactical-style garda uniforms and carrying assault rifles, raided the venue.

It is the prosecution’s case that Mr Hutch was the man dressed as a woman and that, although he did not shoot Mr Byrne, he was part of a “shared intention” to commit the offence.