Superintendent believed allegation should be examined outside Cavan-Monaghan division 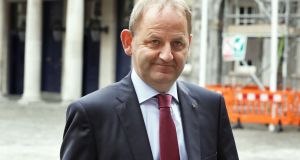 A Garda superintendent immediately “batted on” to his superior a notification from the child and family agency Tusla that there had been a child rape allegation made about Sgt Maurice McCabe, the Charleton Tribunal has heard.

The notification was sent in May 2014 after a counsellor with the Rian agency made a mistaken report to Tusla saying a client had made a retrospective allegation of child rape.

The client was the daughter of a Garda colleague of Sgt McCabe, being called Ms D, but in fact no such allegation was made by her.

An allegation by Ms D in 2006 against Sgt McCabe, involving a much less serious claim, had been investigated by the DPP and no charges brought.

The same day the erroneous notification was received in Bailieboro Garda station, Superintendent Leo McGinn wrote to the chief superintendent in charge of the Cavan-Monaghan division informing him of the development.

This was the same day that the Minister for Justice, Alan Shatter, resigned for reasons associated with the McCabe controversy, the tribunal heard.

Superintendent McGinn said he believed the file from the 2006 investigation into Ms D’s complaint was in Monaghan Garda station and that as the woman making the allegation was the daughter of a Garda from Bailieboro Garda station, the case should be reviewed at officer level in the Garda or by the cold case unit.

Any review should be done outside the Cavan-Monaghan division, he suggested. The tribunal has already heard that Ms D’s father has told the tribunal he was told by Superintendent McGinn in Bailieboro Garda station of the notification and was shocked because of the rape allegation it contained.

He said he did not say anything about the discrepancy between the report and what he knew had been alleged in 2006.

Ms D later contacted the Rian counsellor to have the wrong allegation corrected. The sergeant in charge of Bailieboro Garda station in Co Cavan in 2014, Sgt Tony Byrne, said he did not know of any conversation on the day the notification was received in Bailieboro, between Superintendent McGinn and Mr D.

Michael McDowell SC, for Sgt McCabe, said apparently there was such a conversation. He said Superintendent McGinn immediately “batted on” the notification to the chief superintendent.

Sgt Byrne said he moved to Bailieboro station in March 2013 but never heard talk of an allegation of child rape against Sgt Maurice McCabe.

He told Kathleen Leader BL, for the tribunal, that he was aware in 2013 of the complaints made by Sgt McCabe about the standard of policing in Bailieboro and had known in a general way that there had been an allegation of sexual misconduct against Sgt McCabe.

Sgt Byrne said he did not recall any conversation in the station in 2014 about a new Garda notification from Tusla which contained the erroneous allegation of child rape.

There was lots of conversation about the general issue of Sgt McCabe and related matters. “We don’t live in a bubble.” The tribunal continues.