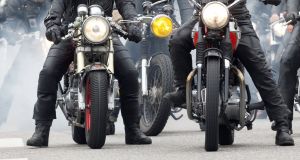 Alan McNamara is accused of shooting dead a member of a rival biker club in Co Limerick. Photograph: Istock

The wife of a man accused of shooting dead a member of a rival biker club in Co Limerick has told her husband’s murder trial she has lived in fear for the last two years.

Mary McNamara was giving evidence at the Central Criminal Court in Dublin where her husband Alan McNamara (51), from Mountfune, Murroe, Co Limerick has pleaded not guilty to the murder of Andrew O’Donoghue on June 20th, 2015 at Mountfune.

Also on trial is Ms McNamara’s son, Robert Cusack (28), of Abington, Murroe who has pleaded not guilty to impeding Mr McNamara’s apprehension, knowing or believing him to have committed a serious offence.

The trial has previously heard that the deceased was a member of the Road Tramps motorcycle club while Mr McNamara was associated with the rival Caballeros.

Ms McNamara told prosecuting counsel Michael Delaney SC that she and her husband went for a drink on Friday, June 19th, 2015 at Kelly’s pub in Doon, Co Limerick. Mr McNamara left the pub ahead of his wife as she went to the toilet. When she emerged from the pub she saw her husband on the ground and there was a “big man on top of his back”.

A third man, who the court has already heard was Seamus Duggan, held Ms McNamara back after she tried to intervene. Once they had the waistcoat they left in a jeep.

Ms McNamara said she and her husband went straight home and a short time later she was in her garden with her nine-year-old son and adult daughter when a car pulled up with three men inside, one of whom was carrying a gun.

She said: “They shouted, ‘Alan, we’re going to kill you and burn your house down’”.

She said she and her family were terrified. When Mr Delaney asked her if she could name any of these men, she said she did not want to do so.

Defence barrister for Mr McNamara, Hugh Hartnett SC, reminded her that she had made a statement to Garda in which she named the men. She told him that she did, but that she lives in fear and added: “I have lived in fear for the last two years.”

After a brief break in proceedings Mr Hartnett asked her again to name the men and she gave three names: Kevin Ryan, who was the Road Tramps president at the time, Jim ‘Bob’ McInerney, who was the club’s sergeant at arms, and a third man she named as Dermot McKenna.

Giving his evidence, Mr McInerney said he had heard that Mr McNamara’s patches were taken on the Friday night so he warned other members of the Road Tramps to be careful when approaching the clubhouse. That Saturday he received a phone call from Seamus Duggan who was in a “situation”.

The court has previously heard that Mr Duggan was chased by members of the Caballeros at speeds up to 100mph as he tried to get to the clubhouse for safety.

Following the phone call, Mr McInerney picked up Mr O’Donoghue, explained to him that their friend was in trouble and drove to the clubhouse. They were at the clubhouse when Mr McInerney said he saw the accused man running towards the gates carrying a “short-barrelled type of shotgun”.

He said he saw Mr McNamara shoot Mr O’Donoghue as the deceased tried to close the gate. He added: “He still had his hand on the gate and then he just fell sideways.”

Another witness, Derek Geary, told prosecuting counsel John O’Sullivan BL that he and the deceased were trying to close the gate to the motorbike clubhouse when he saw a man approach carrying what looked like a sawn-off shotgun at waist height. He said he saw the man raise the gun and then the witness looked to Mr O’Donoghue. “I heard a shot,” he said. “Andrew had been shot and hit in the head.”

When he looked back to the gunman he said he saw him open the barrel and as he tried to insert another cartridge the gunman said: “I got one of them.”

Mr Hartnett put it to the witness that what he actually heard was: “I think I shot one of them.”

Following the shooting he hid behind the gate with his back to it until he heard a car drive away.

The emergency services were called and Mr McInerney said Mr O’Donoghue made “gurgling” noises as they tried to help him.

The trial continues in front of Mr Justice Paul McDermott and a jury of seven men and four women.